Fitting a DCC decoder into an HO Jouef steam loco 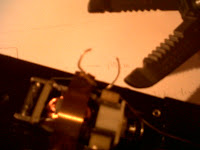 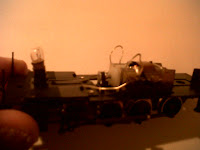 The first task is to cut the two wires carrying electric current from track to motor. 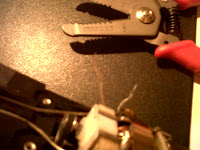 The ends of the wires have to be stripped of their plastic covering using my new wire stripper. 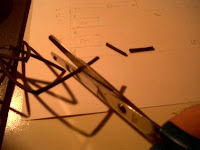 4 short sections of black heatshrink tubing are cut off and slipped over each of the engine's wires ready to be moved into position to cover the soldering joins between motor wires and DCC decoder wires. 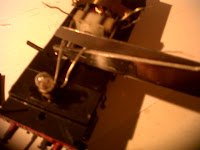 I decided to sever the connections to the front light incase that caused a short circuit to the chip - not sure about that but better safe than sorry. 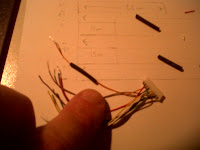 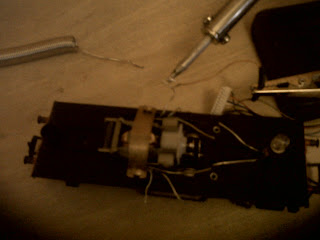 Next I tried to solder the 4 pairs of wires together - you really do need two pairs of hand to hold everything in position plus the solder plus the soldering iron. I'm convinced that one of the four joins will be unsuccessful. Both ends of the wires to be joined went black and after trying the whole procedure again, the result was the same. It was as if the metal wires had been transformed into  molten black plastic from the plastic sleeves. One has to live in hope.

Next one slides the heatshrink tubing over the solder joins and melts them into permanent position with a hairdrier. This prevents the metal joins touching any other metal and short-circuiting. 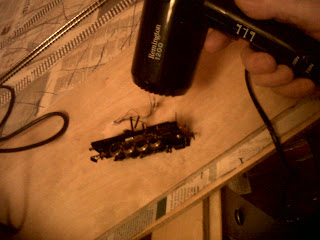 Finally, one joins the actual chip (the black square in picture) to the wires by plugging in that white endpiece that the wires go into. A most UNSATISFACTORY fit - does not feel plugged in at all but one is scared to push too hard in case something breaks. 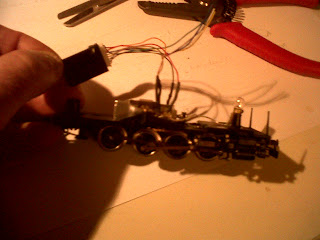 Oh well, we'll see what happens tomorrow when a short section of track is wired up to the DCC control system. Do not believe it will work, I'm afraid.