A grown man runs his first model train since childhood.

A few months ago, I purchased this Electrotren autocar from a stall at a model railway exhibition held in the Cite du Train Museum in Mulhouse. 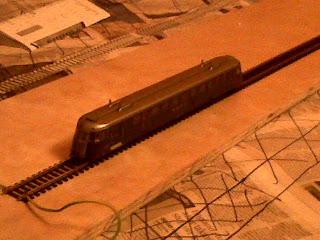 Decided to try it out. Apparently, one should run-in any loco before one fits it with a DCC chip. A poorly running loco can blow the chip.

Of course, without a chip installed one cannot run the loco off the DCC controllers. So I bought a 9v DC battery, found an old piece of wire which I tied (literally) to a piece of track and placed a loco on the track. Amazing result: the loco moved! As I say, the first time I've operated a model train for over 45 years. Also, red tail lights and white headlights came on. It's a pity I can't (yet) show a video. Still photos will have to do. 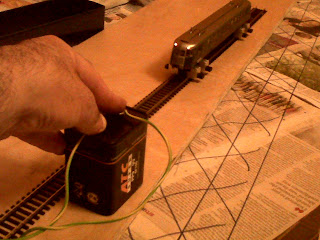 This photo shows the loco on a Bachrus running stand - more of that in the next blog.
Posted by Tony Morris at 21:02