My choice of HO scale

a) it is similar to the OO scale Hornby train sets of my youth which have set the iconic image in my mind of what constitutes a model railway. (Continental model trains are built to HO scale 1/87 compared with the slightly larger British OO scale of 1/76; both scales use the same width of track to run on!)

b) N scale or N gauge is too small and finicky for my eyesight and level of dexterity.

However, unless a passenger train has at least 4 carriages in tow, it looks foolish. Therefore, some months ago I explored the possibility of N gauge which is very small and allows extremely long trains in a small space. I purchased quite a lot of French rolling stock from the internet and some kit buildings.

Tragically, I realised that my eyesight and hand dexterity would never cope and so after several sleepless afternoons, I decided to cut my losses (or at least accept them) and go for the larger HO scale ie the scale most of us associate with model trains (OO is the near equivalent scale in UK). I'll try and sell the N gauge stuff on eBay.

The rolling stock will always be passenger-based because I want to create that atmosphere of expectancy that a traveller gets at a railway station. Freight holds no interest for me. Unless one means that excellent Edinburgh based band called "Freight".

The retail pleasure of hunting down and then ordering the appropriate stuff off the internet has been enormous. Augmented by the totally unnecessary but even more enjoyable travelling to Mulhouse in the Alsace to buy more stuff at an exhibition where there were a dozen stalls of specialist French model train retailers present.

Here are some photos of the rolling stock I have accumulated over the last couple of months. 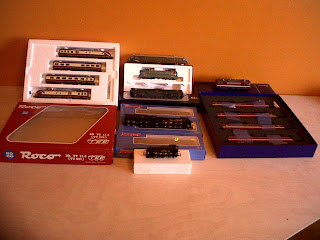 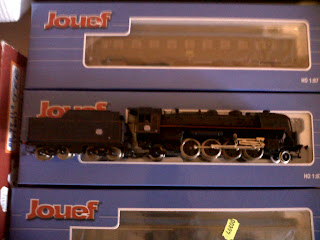 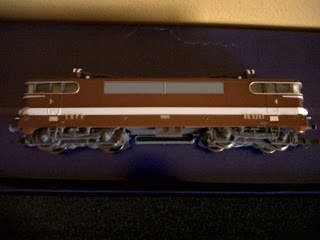 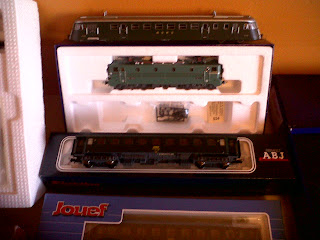 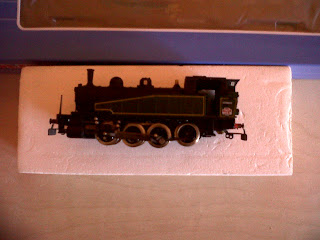