Once again, struck by the issue of tiredness and creativity. I really couldn't be bothered trailing into town tonight to spend 3 hours carving away at my Gare du Nord. (That sounds like an innuendo from the era of Round the Horne.)

Once ensconced on my stool (more Round the Horne) I just stared at the piece and couldn't think what to do next. And the more I stared at it, the more I worried about the clay drying out and it becoming impossible to work with it any more. The teacher, though, is excellent and by asking me what I wanted to do next, somehow nudged me into taking a few tools from the cupboard and so I began making some marks on the clay.

For the next 3 hours (more or less) I made more and more marks using the ends of felt tip pens, pritt sticks and some traditional etching tools. I was very pleased with the result. 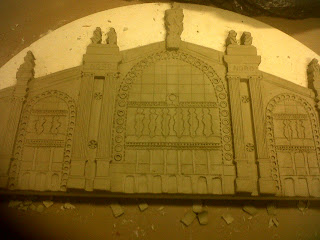 Over the next week, the clay will be allowed to partially dry out (kept on a shelf with a plastic bag loosely covering it, but NOT in a cupboard). Then next week I'll apply shellac to everything except the windows; the latter I will stroke with a damp brush to gradually wash away a level of clay and so recess them.

The following week I'll have the big decision as to which glazes (colours) to decorate the facade with.

As I have observed before, there is no accounting for taste.

For the first time ever in these evening ceramics classes, one of the male students (they tend to be younger than the female cohort and there are only three of them - excluding me) asked if he could put on the radio for background music. He put on SIX MUSIC and I enjoyed the first two songs that were played. Then one of the women complained and said that she hated that kind of music and hoped she wouldn't have to listen to it all evening. Another woman joined in the complaints but nobody else (including me) seemed to mind.

In response to these complaints, the boy concerned asked if RADIO 1 might be tried instead? After 3 minutes of that, the same complaining response.

One of the complaining women then said that if  she was to listen to Classic FM then that would be acceptable.

Up until this point, I had been Mr Tolerant. I actually find SIX MUSIC to be so catholic in its tastes that the end result for me is patchy or hit and miss; but, I was happy to let  anyone choose whatever station they wanted and had no intention of passing comment or entering the debate.

Until the mention of the dreaded CLASSIC FM. That radio station makes me see RED. I loathe it.

Fortunately, after a total of twenty minutes, the radio experiment ceased and was turned off. I doubt we'll hear it again.

I'm sure that these chaps have been played often on SIX MUSIC. I love this video.