Decided today to face up to pinning down my test track using what seemed a very unpromising combination of:
a finger operated pin vice drill - which actually looks like just a component of a drill and not a drill itself;
hair thin  drills which everyone says snap in two when you use them;
teeny little pins which look totally incapable of pinning anything down and which everyone says fold up when you try and hammer them into the track;
and, finally, no proper hammer - so I used the head of a pair of pliers instead.

Guess, what? Total success! The pin vice was easy to operate, the drills didn't snap and although two pins did bend and had to be discarded, the rest didn't and actually do hold the track firmly in place. 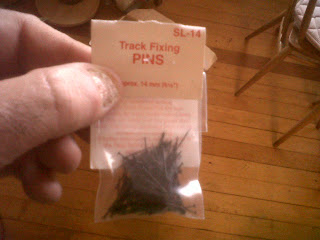 Only one pin goes through the centre of a sleeper. Not sure how frequently one pins the sleepers but I put a total of three through the set of points.


Basically, they are invisible.

Where the flexitrack had to be held in a curved position then I pinned more frequently - otherwise, I think every six inches will do. I used a tracksetta to keep the track straight where necessary. 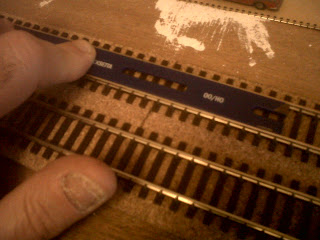 Glad to see that there are two Anton Bruckner symphonies being performed at the Edinburgh Festival this August plus his Te Deum. Unfortunately, the 9th Symphony and the Te Deum are being performed on period instruments ie instruments of a design and manufacture similar to those that would have performed the pieces in Bruckner's day viz 19th Century.

I find period instruments thin and reedy so I might go instead for the Philarmonia's performance of the 4th Symphony under the conductor Esa-Pekka Salonen. 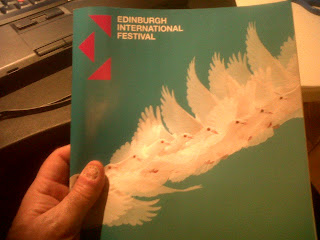 On the one hand, Christ's doctrine is fairly straightforward: "Love one another as Christ loved us." Admittedly, it is not always obvious which path one should take to fulfill that edict, but I think we all know in our hearts, 99% of the time, what actions we should take towards others in order to imitate Christ's love for us.

On the other hand, there is the mystical element to Christ's teaching: "Lord, ........ you have the words of eternal life." To believe in an eternal life and understand what it means is another kettle of fish altogether.