First, a painting update on the points. Couldn't risk using the spray paint over the points mechanism in case paint infiltrated the mechanism of the points motor. Therefore, have had to touch up the missing sleepers with a paintbrush and some acrylic artists' paint (Venetian Red). 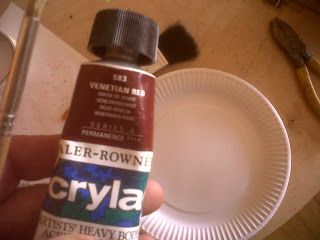 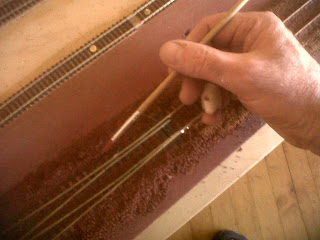 As a child, I loved using lichen to represent bushes and general shrubbery on my model railway. Now, I think the use of lichen is ridiculous. 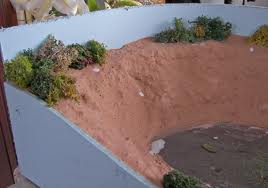 My objection is that it doesn't actually look like bushes or shrubbery. It is rather a SYMBOL for shrubbery. It is as if one is saying to the viewer, "By the way, wherever you see lichen then please imagine that there is a bush growing there." One would be as well placing a little label there instead with the word "BUSH" printed on it.

I feel almost as strongly about the use of flock powder which usually comes in green and is spread on slopes to simulate grass. 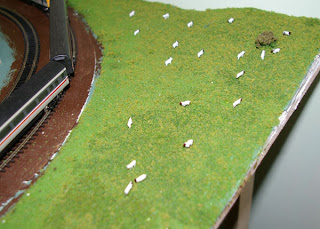 (By the way, there are some fantastic model trees available - they really are works of art.) 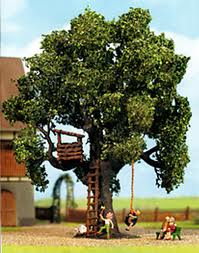 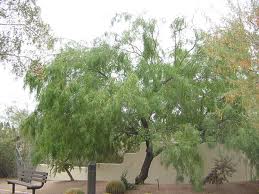 My approach is to decorate the layout so that it either succeeds aesthetically or incontrovertibly simulates reality. Also, I want the predominantly green or red rolling stock to have a background which suits their colouring.

So, rather than use flock or lichen to fill in the area around the ballast, I want to decorate that area so that it HIGHLIGHTS the ballast and thence the rolling stock. With that in mind, I decided to paint the rest of the test board in yellow emulsion. I'm not sure that yellow was the right choice - I'd considered black or bottle-green as well.

But that is my aim - highlighting, rather than using something that one hopes sends out a message to the viewer: "Oh, by the way the ballast is surrounded by tarmac or gravel or concrete or a scrub land or whatever." 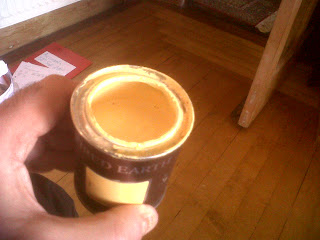 By the way, this week Radio 3 is playing 8 days of continuous music by Schubert.

"Eight Days a Week", another great track from the album "Beatles For Sale".
Posted by Tony Morris at 15:11