Electrically operated points allow one to change their setting from a distance and on my final layout that is what will happen. The various switches will congregate on some kind of control panel which will be situated away from the layout itself.

But for now, I simply want to practise installing electrically operated points and so have located the switch  trackside.

﻿
﻿
﻿﻿﻿﻿ The hole has to be wide enough to house the body of the switch and so I began the hole with a 3/4 inch drill. One then stops and drills the last part with a much smaller drill which allows the narrow cylinder of the switch to poke through to the surface.

Sandy Wright is a Scottish singer-song-writer who has been on the go for ages. I only came across him last year when someone gave me a CD on which his songs are performed by a variety of British  singers who presumably esteem him greatly.

It's a really excellent album. 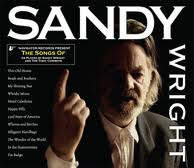