Used the Shellac technique last night in the ceramics evening class. Shellac turned out to be very difficult to get hold of. In the end got some from a supplier to the French polishing trade.

Basically, one paints on to the dried but NOT fired clay any features that one wants to be raised up  - in my case, window sills, doorposts, arches etc. After 30 minutes, the shellac is dry and with a warm damp sponge one then rubs away the un-shellaced clay leaving the shellaced features upstanding.

In the photos below, the shellac looks golden in colour. 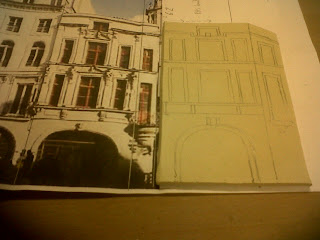 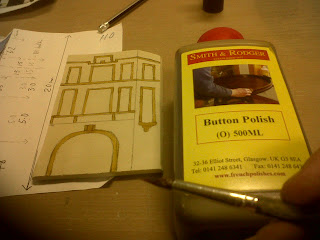 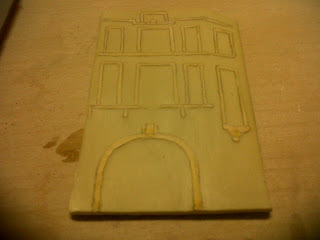 Once the clay was sponged away, it was painted in a green under-glaze. Once fired in the kiln, not only will the shellac be burned off but the green paint on top of the shellac will be burned off leaving those features standing up and the colour of dried clay as opposed to the background green.

Only the pre-fired tile was available for photographing - it will be fired during the week. 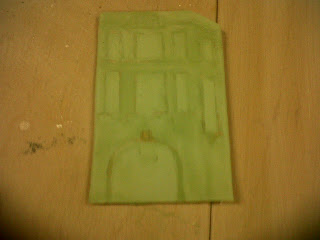 Last week's tile followed a similar procedure but with wax-resist rather than shellac. It was fired without a glaze and had some features painted on last night. During the week, someone will glaze it with a transparent gloss and fire it for the final time. Here it is before that final firing. 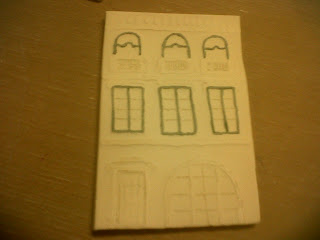 After a hectic day, many music lovers turn to Bach if they want to be soothed by music that is coolly intellectual and spare.

Bach rarely does it for me.

I prefer the small piano pieces of the Second Viennese School.

Here played by Uchida they definitely stilled the chaos going on in my mind this early evening. 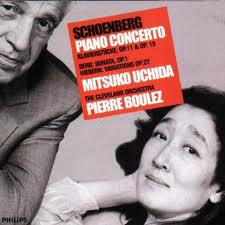