I hope there's some truth to the statement, one step back, two steps forward. The pile of books is weighing down the test-layout board whose supports are being heightened to accommodate the tortoise points motor - allowing the glue to set under pressure of the weight of the books. The rest of the chaos has no justification. But sometimes it's reassuring to know that behind the scenes there often is a very unprepossessing mess, so I have put the picture in.

This was a performance I'm glad I saw before I die - it was that special.

The surviving member of the Silver Apples, presumably well into his 60s, is Simeon Coxe III. Here is an extract from Wikipedia. (For some reason, I thought they hailed from California.)

Silver Apples are an American psychedelic electronic music duo from New York, composed of Simeon Coxe III, who performs as Simeon, on a primitive synthesizer of his own devising (also named The Simeon), and until his death in 2005, drummer Danny Taylor. The group was active between 1967 and 1969, before reforming in the mid 1990s. They were one of the first groups to employ electronic music techniques extensively within a rock idiom, and their minimalistic style, with its pulsing, driving beat and frequently discordant modality, anticipated not only the experimental electronic music and krautrock of the 1970s, but also underground dance music and indie rock of the 1990s.

The basic set-up in MONO which is basically a very big cafe was Simeon standing behind some tables on which was a lot of Heath Robinson electrical paraphernalia last seen by me in school physics lab.

Here are pictures from the web of Simeon playing somewhere else. 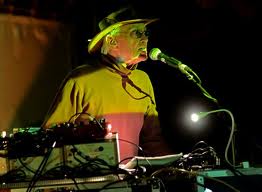 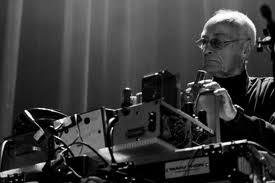 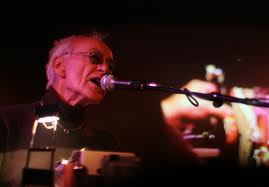 Here are some fuzzy pictures I took with my phone last night. 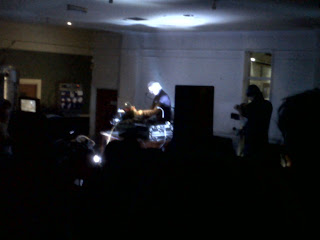 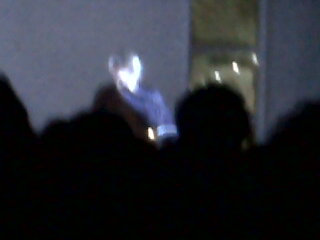 The electronic music and bass lines were magnificent. But what really surprised me was Simeon's  voice. Silver Apples are not an instrumental band, they do 3 to 4 minute songs very melodic and poppy in feel AND Simeon's voice is as smooth and tuneful as ever. I was expecting him to have augmented the set up with some younger folk doing the singing, but he did everything.

The sound is a cross between the Magic Roundabout, Dr Who theme tune, techno beats and standard pop music. Hot Chip are obvious descendants in my view.

The average age of the crowd - and it was mobbed - was early twenties. This was not an evening of nostalgia.The reception was raucous. He did two possibly three encores and still the crowd screamed for more.

Simeon himself was charming. He had a huge smile on his face at the end of each song. At the very end he got down from the makeshift-stage and  chatted with members of the audience.

AMAZING COINCIDENCE: At the end of the concert I walked up to Argyle Street to get a taxi and guess what,  a taxi appeared almost immediately from a side-street and printed on its passenger door, the name of the taxi owner J H Simeon!!!!!