Laying HO track - pinning it down

When one is preparing the wiring, working out where the cork underlay is to go, positioning the points motor exactly beneath the throw-bar of the points and generally drilling holes into the baseboard for this, that and the next thing, it is important to have a method for temporarily fixing the track in position. For one is basically experimenting with permutations of track/wires/holes/etc.

At this stage of experimentation, I wasn't keen to screw down the track and then unscrew it so as to adjust it by 2mm and then re-screw it etc etc. Leaving aside the fact that that would entail drilling very small holes in the very narrow plastic sleepers - a recipe for decimated sleepers if ever there was one.

Obviously, pinning down the track with panel pins or gluing it would be permanent.

Up until now I have been using drawing pins, but they are murder on the old finger nails when being pulled out and seem to have a very short half-life -after a few insertions the pin always ending up out of kilter with its head. Also, now that I have the cork underlay beneath the track, the pins don't reach very far into the baseboard itself.

The solution - wall staples. Very firm fixing but easy to remove with a screw driver and no damage to the sleepers - each staple straddles a sleeper. 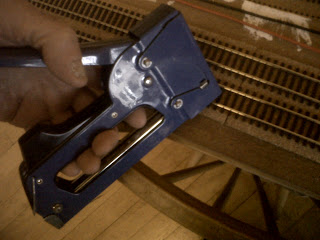 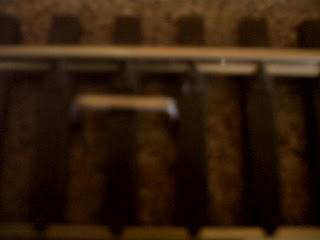 Off to see the Silver Apples tonight in Glasgow.

Hoping that I won't appear to be the oldest person there. The last surviving member of the Silver Apples is bound to be older than me since he was mucking about with synthesised music in the 60s when I was simply mucking about with Scalextrix. 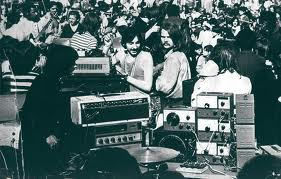