As I anticipated, last night's session at the ceramics class was exhausting.

Since last week, the great slab of clay from which the Gare du Nord facade is being constructed had been kept moist and supple (basically in its original pristine condition) by simply covering it with a black bin bag (fairly loosely) and placing it in a steel cupboard - just like an office cupboard and not obviously airtight or anything.

This is quite encouraging, it means that one can work on a piece over several weeks, in as long or as short a session as one can manage and simply wrap up the clay to preserve its supple properties ready for next time.

Indeed, the lecturer advised keeping the black bag over the part of the clay that one was not working on during the course of the evening otherwise the rest would dry out.


And then back into the cupboard covered with the black bin bag for next week.

Looking back on the 1960s/70s, I never bought into all the hippy philosophy. I loved the music and I wore the clothes but even I could see that all that free-love business was a load of old cobblers.

Nevertheless, Stephen Still's song Love the one you're with which is a bit of an anthem for ageing hippies has always seemed to me to contain a lot of truth.

Leaving aside specifically  what he probably had in mind, there is something essentially Christian about responding benevolently to the people who surround one at any time: on the bus; in the office; on holiday; in the hospital waiting room; in the supermarket queue; in a traffic jam; in the classroom; in the restaurant.

I would say that I have been a bit guilty about perceiving people that I do not know but who have  been right next to me on a train or a plane or in a queue in the bank in terms of indifference.

As a rule, that probably suits everyone involved, but what if one of these people needed the loving consideration of a fellow human being RIGHT AT THAT MOMENT and I was the only option for them?

Anyway, it's a fairly good song. (Saw Crosby, Stills and Nash in Edinburgh a few years ago - absolutely dire, I'm afraid to say.)

Stephen Stills wrote one on my favourite songs of all time: The Myth of Sysiphus 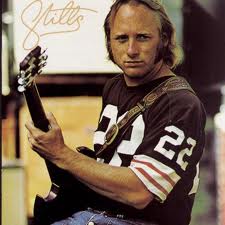