Pressed ahead with this idea of making my own table legs for the baseboard rather than going to IKEA.

Went to B & Q and after spending 10 minutes looking for someone to help me in the wood yard was dealt with by a very helpful and ridiculously erudite gentleman called Graham.

The lengths of wood were too long to fit in the car and so I asked Graham if I could borrow a handsaw to cut them in half. He said  that health and safety rules prevented either him or me sawing wood by hand in the yard, "which is ridiculous when you think that  we probably have 50 years of sawing experience between us."

I didn't say that the split was probably 49 years to him and 1 to me.

He bent over backwards to advise me, and having straightened up, then cut the lengths of wood so that they would fit into the car (using the authorised power saw). 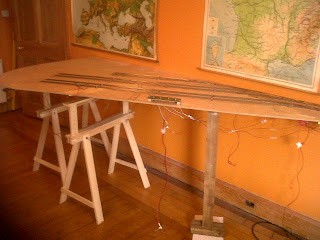 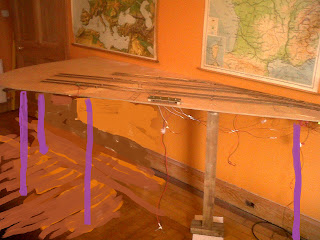 The legs will be made of a smoother finished wood than the existing wooden leg which is basically a sawn off fence post.

I've cut the legs to size and have attached a short piece across the top which I hope will improve the rigidity and stability of each leg without the need for cross-members joining pairs of legs - we'll see. The idea is that I'll be able to store stuff that is currently in the centre of the room under the baseboard and cross-members between legs would make it more difficult to slide boxes into position. See final photo below. 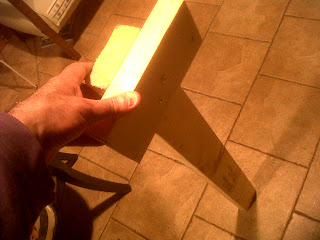 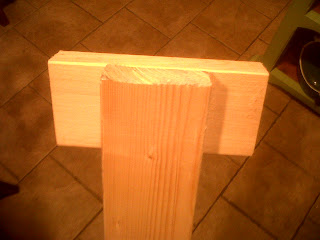 Last night, listened to a couple of hours of Crissy Criss (and then, out of curiosity, his step-father, Kenny Ken).

Despite the silly names, these drum 'n' bass folk are really onto something.

Occasionally, I give contemporary classical music a chance. By contemporary, I mean as of now. Despite the fact that I love avant garde classical music from the 20th Century, I think that 'as of now' all the musical talent is to be found in these dance hall genres

I honestly find 90 minutes of continuous drum 'n' bass as stimulating as a 90 minute symphony by Bruckner: it's the same mental experience for me.

Forgot to take a photograph but it was a tin of supermarket curry washed down by a pint of milk.

Tonight's will be the same.
Posted by Tony Morris at 16:43