Two projects are on the go a ce moment.

This is a ceramic rendition of a cardboard mock up of same.

The ceramic slab had been painted with a criss-cross of Shellac which is water resistant. The next stage was to use a very wet brush and rub away the unshellaced areas ie the windows and doors, so that they would be indented and thus emphasised. 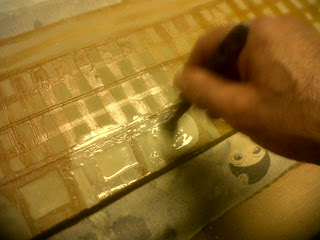 I quickly manufactured a gable end for the building and etched on it a billboard poster advertising a fictitious brand of cigarettes, "Fume". 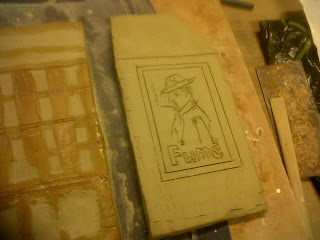 Those two pieces will now dry out over the next few days and then be fired in the kiln. At that point, the golden-brownish shellac will burn off.

The second project is the HO scale facade of a Parisien church, based increasingly loosely on St Paul-St Louis.

Last night was spent continuing to etch out details, imprint patterns with the plastic ends of felt tip pens, and stick on additions to give the whole thing depth.

For example, this is how one adds on a little rectangle of clay. One must etch cross-hatchings on both the surface to which the rectangle will be stuck and to the rectangle itself. Then one paints both surfaces with "slip" which is liquidised clay. Note, the state of dryness of both pieces of clay must be the same. Otherwise, they shrink at different rates and the adhesion fails or the add-ons crack. Rather like the parable of the wine in the new wine skins - I think. 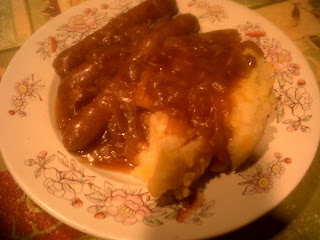 ++++++++++++++++++++++++++++++++++++++++++++++++++++++++++++++++++++++++++
Thomas Merton:
Attended morning Mass at St Paul's Whiteinch. Walked there. On way back looked in on a new corner shop of Arabian persuasion. No customers. Very small selling a mixture of Cornflakes, Walkers crisps and exotic Arabian produce such as stuffed vine leaves and flat round breads. Hiding at the back was a tiny Halal meat counter.
On the way out the chap at the till asked me how I would be voting in the forthcoming (a few years away, in fact) Scottish Independence referendum. I don't feel that strongly about it but I told him I'd vote No.
"Why", he asked, "reasons of finance?"
"Yes, there's that", I replied. "And, also I'm English."
He seemed to find that reply very witty and gave me the thumbs up.
Of course, I'm half-English/half-Welsh and have lived exclusively in the Glasgow area for 55 years.
************
So, to Day 1 of my new super-charged prayer life.
In Catholic and intellectual circles, the American Thomas Merton has always been held up as a clever writer on the subject of prayer.
I'm not looking for cleverness; I'm looking for honesty and a direct line to God.
I'll give him a go though. 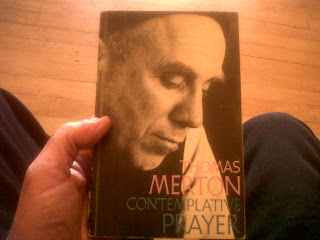