Made two rows of window frames from FIMO - an utterly tedious business.

Attended a lunchtime concert of Indian classical music at the University. Went by bus using my free pass and the concert itself was free.

The so-called Concert Hall at Glasgow University is really just a big room in the old building.


On walking into the room one was greeted by a single and completely unnecessary joss stick, just a 6 inch vertical wire, that had been stuck into a block of wood. It was  feebly burning away and yet filled the room with its perfume. Rather amateurishly, I thought, considering this was an event organised by the University itself, the joss stick had been placed on a wooden table, as if one would normally expect to see one there,  alongside all the information sheets and programmes - a bonfire waiting to happen.

The concert lasted for 50 minutes and was performed by a British woman, Joyce Terret, on Sarangi and Hardeep Deerhe (who sported a huge white turban and bushy black beard) on Tabla. There was also a young child with them who had been equipped with an instrument but didn't seem to play it.

I've heard this kind of stuff before, but never live. I was expecting to be bored but hoping to be transported.

From the very first note, the performance was fantastic. It was hypnotic. What really struck me from the very beginning was the special and wonderful quality of the sound.

This is a picture of Joyce on Sarangi  accompanied by somebody else on Tabla. 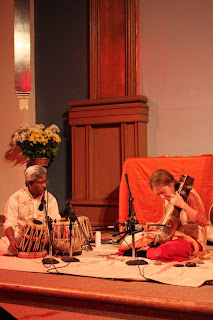 The British comedian, Russell Brand, was on a chat show last week talking about his meditational habits. On being gently teased by the host about how much of each day he seemed to spend doing it, he retorted, self-mockingly, that when one was communing with the Universe one could hardly look at one's watch and say, "well, I've had enough of that for one day."

Apparently, it is this notion of making oneself one with the universe that is at odds with Christian belief.

Christian meditation aims to make one more intensely aware of the majesty of God, Christ and the Holy Spirit and aims to intensify the separation between man and God.