At last, those fiddly FIMO window frames are finished. 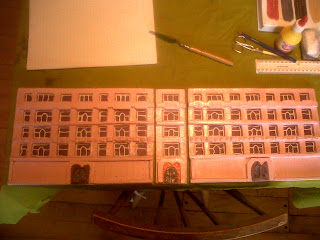 All three walls are now window-ed, and a reminder below of how they relate to one another.

Had a beautiful drive through rural Lanarkshire today: not quite at its most deliciously bleak but still pretty muted in its pre-Spring state.

Accompanied by some beautiful but troubling piano playing on the Lunchtime Concert on Radio 3. Turned on a few minutes after the start of the concert and so didn't know who was playing.

But whoever it was, man or woman, their touch was what stood out, transforming what is for me that most familiar of Beethoven's sonatas, the 'Moonlight' into something new and impressive.

No sooner had I expressed this thought to myself than it was followed by another: "I bet you it's Llyr Williams and it would serve me right if  that's who it turns out to be!"

Several years ago when Llyr Williams was one of Radio 3's New Generation Artists, he seemed to be playing every time I switched on the radio. And, he was brilliant.

But, I saw him play Beethoven's last 3 sonatas in Perth a couple of years ago and not only did I think he was terrible but I found his demeanour at the piano to be completely ridiculous. (The recital got rave reviews in the press.)

Well, today it was indeed Llyr Williams playing. And he was sensational as he followed the Beethoven with Scriabin and then some short pieces by Brahms. One could hear every single note and Williams imparted meaning to each one of them.

Spent a full 5 minutes surveying the various basic Margherita pizzas on offer trying to find the cheapest. They varied in price from £2 each to £5. But, the £2 version looked hellish. I want to economise but I don't want to eat sub-standard food.

Clearly, this economical shopping is going to take more time from my day than I'd anticipated. But I suppose one will get better at it with time.

Continuing my reading of chapter three of: 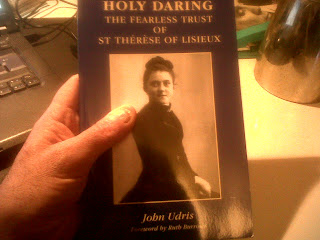 So far, in my interpretation of this chapter on the value of simplicity in one's faith, I've equated simplicity with single-mindedness.

But now the author has introduced the concept of Truth which I was not expecting.

Let me quote directly from the book.

"St Therese relentlessly tracks down the truth believing that it is always ultimately kind. For her trust and truth are sisters. She trusts ferociously that 'the truth will make you free' (John, 8.32), and that the pain which often accompanies it is the blood rushing back into the veins which have been starved by the tightness of a tourniquet, or the stinging of eyes too long in darkness adjusting to the light." p 20.

Firstly,  I never hesitate NOT to tell the truth if the truth will hurt someone's feelings. But the phrase "it is always ultimately kind" gives me pause on that front.

Secondly, "the truth will make you free" instantly reminds me of the character, Mathieu, in volume 1 of Sartre's The Roads to Freedom.

Mathieu wants to be free because one can only be human if one is free.

It troubles me that, much as I love Sartre's work, I have never held freedom to be an important goal. (We're not talking about freedom from incarceration.)

But reading that quotation from John, "the truth will make you free", also gives me pause for thought.

Perhaps my meditational practices (when I actually begin them, that is) should be concentrated on these associated notions of truth and freedom.