1) I was told that the facade for the St Paul-St Louis church had just been put in the kiln for firing and would be ready for underglazing next week. Took a peek in two of the three kilns but couldn't see it; the third kiln was locked.

2) Was disappointed at how uniformly blackish the row of tenements had turned out. I'd underglazed it last week with a combination of blacks and grays - see below. At some point during the week it had been fired to secure the black and gray underglazes.

But the grays seem to have vanished from the equation. One has to accept the factor of serendipity (or sheer bad luck) when an underglazed ceramic piece emerges from the kiln. Apparently, the colours turn out unpredictably.

I accept that element of uncertainty: indeed, I welcome it because my own sense of colour is poor and I'm relieved that the kiln, in its wisdom, can influence the outcome.

Nevertheless, I'm disappointed with the resultant emphasis on the black rather than the gray. The next stage was to brush a satin-finish glaze over the piece. It will go back in the kiln and hopefully return with a  bit of a sheen. Perhaps that will help the situation. 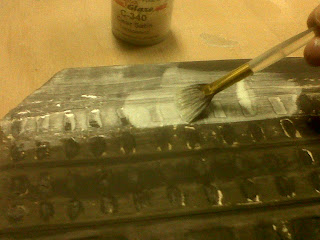 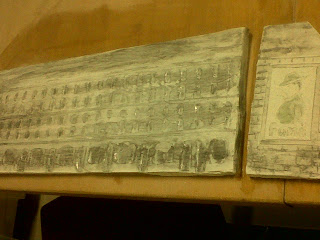 And, talking of the Boulevard Haussmann, the green paper shutters have now been applied to the windows. 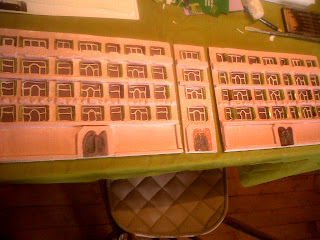 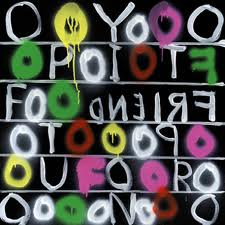 
Today's lunch on a shoestring:

For this shoestring campaign to make sense, I will, starting from Monday, count up how much is spent each day on food and food related shopping. At the end of the week, I'll tot  up the spending  figure. That weekly figure will be the one that is reported in this blog.

Restaurant visits and related items like washing up liquid and cooking oil will be included.

I can think of two possible aims:

1) Temporary altered state of consciousness - either pleasurable, revelatory or both.

2) Permanent altered state of consciousness - either pleasurable, revelatory or both.

Presumably, there are other aims.