Does one need a master? 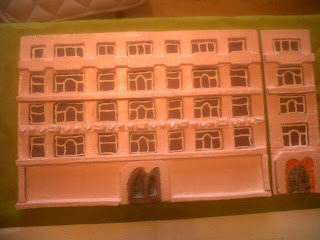 Have completed the FIMO window frames for two of the three walls and glued them with PVA to a backing of purple card.

Here is a reminder of how the walls will join together. 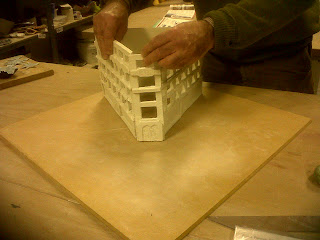 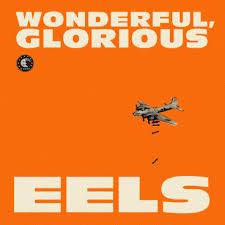 All in preparation for seeing them play in Glasgow next month.

Forgot to take a photograph of it.

Meditation: where to begin.

When I was in my twenties and again, sporadically, through the next few decades I did dabble in meditational practices and attended a few lectures on the subject.

Never really got beyond sitting on the floor, cross-legged. Tried silence as a background and also various Eastern influenced soundtracks - but, basically, to no avail. Nothing happened.

Textbooks on the subject warn one not to go looking for something to happen and that one should not be discouraged when at first nothing happens. It takes practice and patience.

From the little I've read about Christian meditation, far from emptying one's mind, one should focus on something God-related eg a religious Icon; a passage from the Bible; a recitation of the Rosary.

The chanting of meaningless syllables eg "Ommm!", which I recall was recommended for Buddhist meditation,  is  all part and parcel of this idea of escaping meaning and emptying one's mind.

Christian chanting, I suspect, would definitely have a meaning - a Christian meaning.

A Christian would not be attempting to escape meaning but to intensify his understanding of meaning: the meaning of the Christian message.

Having said that, speaking in tongues, which is a Christian practice does seek to escape meaning and embrace the Holy Spirit which is presumably beyond human language. Mmmh. Will have to think more about this.

The point is: should I be struggling away on my own with these issues or should I seek a Master or Guru who can lead me in a productive direction and thus avoid wasting a lot of time?


Apologies all round if I have hopelessly characterised these two positions.