Purchased some cod in almonds and tomatoes from the market and re-heated it using the pretty basic cooking facilities in the appartment here in Vieux Boucau.

There were two open-air concerts available to see last night in Vieux Boucau - both well attended and well received and both crap. Why is French popular music so awful and yet France has produced the really excellent Daft Punk, Cassius, Air and a whole plethora of excellent electronic music as evidenced by HotMix Radio (Lounge format). 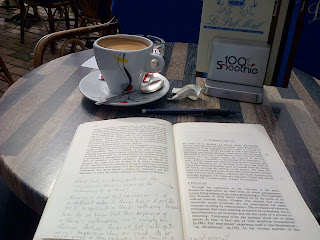 Sat myself down at the cafe with the HotMix Radio (Lounge format) playing in the background and returned to Paul Reed's book on Sartre's La Nausee.

Reed says that Sartre's argument for the contingency of things (ie the world) is that one can never fully define or circumscribe a thing as opposed to a logical or formal object like a circle. A circle can be defined using a finite number of characteristics eg radius. Once one has analysed the characteristics of a circle, there is nothing more to be said about it.

But that is not the case with things. When one is confronted with say a motor car or even something as simple as a rectangular mat on the floor, one can never exhaust its characteristics. It is always holding something back. So, one might say that the rug is red and rectangular. Then it might be pointed out that it is also woolly and threadbare. And of a certain weight and thickness. And made up of a layer of plastic backing as well as its wooly surface and that the threads of wool are of such and such a length and such and such a thickness. And then what about its smell? Eventually, one realises that one can never fully know the full list of the rug's characteristics; it will always possess some other characteristic. It has a superfluous nature to that we we can ever know about it.