The Grooves of Dede Minvielle

Mass this morning at Vieux Boucau.

There was a big music festival in Vieux Boucau yesterday lasted till midnight. But the highlight for me was the last act Dede Minvielle, on vocals and drums, with a young chap on clarinet, a girl on keyboards and a portly gentleman on electric bass.

It was this time last year in Vieux Boucau that my wife and I joined in the dancing at an open air ball and the resolution formed in my mind to spend the next 12 months learning to dance.

As detailed elsewhere in this blog, I embarked upon a series of Tango classes and, in the end, despite huge commitment on my part,  had to admit defeat.

But Dede Minvielle and his combo have re-ignited that desire.

There are certain adjectives used to describe a really professional outfit like Dede's: spare; tight; funky; "in the groove"; laid-back; minimalist; and dare I say it, "cool".

These words definitely applied to last night. As the light faded, the square filled to the pulsating beat of the cha cha cha, pasa doble and God knows what else. And we joined in and, in my opinion, acquitted ourselves pretty well - we moved in ways that we have never attempted before.

The music was the thing, though - intoxicating; one of the best live bands I've ever seen. This Dede chap was a real cool dude - apologies for using such lingo. 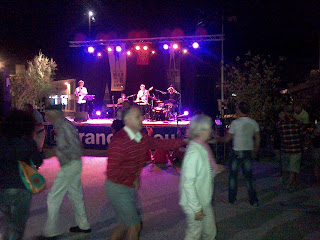 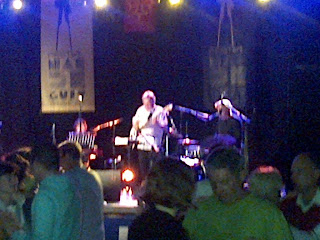 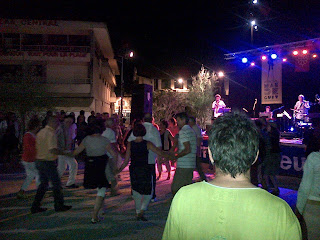 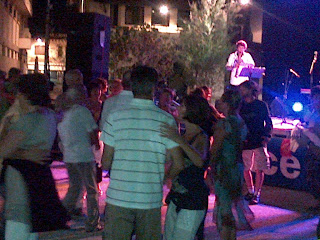 Just found out that his full name is Andre Minvielle and this is his website.

From a stall at the local market: andouillete (basically an edible sausage skin filled with cuts of pork, entrails etc) and potatoes. 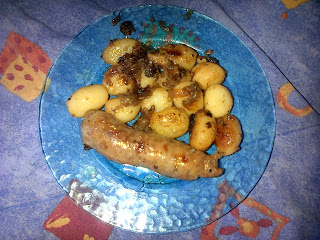