On the way down yesterday from Lacanau to Vieux Boucau I was desperate for the toilet so called in at Arcachon Railway Station to use the facilities; there weren't any so instead took a photograph of a nicely liveried train waiting in the station. 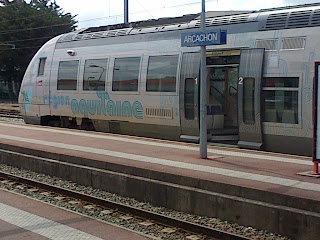 Continuing our journey we were fairly keen to get something to eat and so drew the car up onto the pavement (everyone seems to do that here) where we had spotted a little metal square table and two small metal chairs outside a boulangerie.

In I strode and asked if they served coffee. Indeed they did said the well-coiffeured lady behind the counter. I ordered two cafe au lait and two pains aux raisins and nipped out to signal to my wife to station herself at the little outside table.

When I got back in looking for two steaming cups of cafe au lait, I was confonted with two little coffee-making kits on the counter. I must have looked shocked because, despite the queue that was now filling the shop, the lady took me over to a machine and showed me how to make the tiny expressos.

Giggling away, I took the two tiny plastic cups and the pastries outside convincing myself that I wasn't that bothered for a coffee anyway.

To speed things up, we joined a motorway and after a time stopped at a Services where for £6.50, altogether,  we had the following: 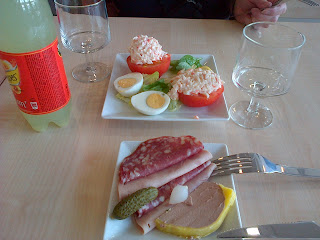 Last year in Vieux Boucau, I found a cafe that played really unusual music. Found the same place this morning and after listening to a continuous sequence of brilliant electronic music determined to ask the waiter what was playing.

He said it was a radio station and I asked him to write down the name. Seems to be an internet station that comes in 15 different formats each playing continuous music of a specific genre. The particular format that I was listening to was Hot Mix Radio "Lounge".


Whilst listening to Hot Mix Radio "Lounge" and drinking my cafe creme, I came across a really interesting distinction between Prose and Poetry provide by Arthur C Danto in his book on Sartre. (Interesting to an ignoramus like me, that is.)

"When a poet expresses emotion, the words are the emotion they are not about the emotion." p 41 Prose writing, by contrast is about something, it isn't the something itself.

The Cote d'Argent in Vieux Boucau is probably my wife and my favourite restaurant - thank goodness we've got something in common in addition to finding Rupert Everett's memoirs very funny. 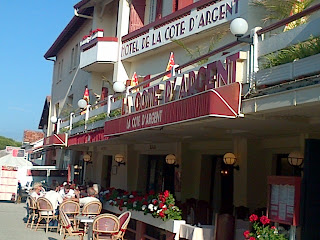 POSTSCRIPT: The young waiter told us that if you want a small cafe creme in France you ask for a NOISETTE.