Prior to going on holiday to France, I'd painted for my model railway layout, a large backdrop of Paris, Eiffel Tower and all. I was exceedingly pleased with it.

However, on returning from said holiday, the thing looked hopeless - 'flimsy' is how I would sum it up. 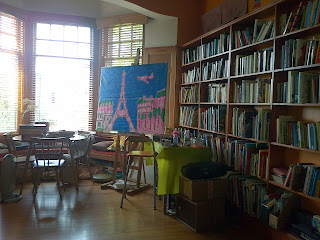 And it looks no better close-up. 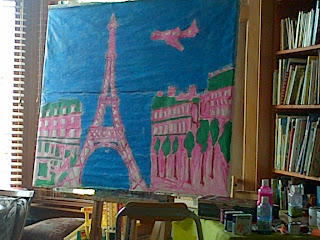 Not sure if there are any adjustments that can be made to save it.

Listening to this radio station with its occasional interspersions of manic French utterances from promoters etc is prolonging my sense of being in France.

Have decided to stop showing the cost of each meal - a photo will have to suffice.

Last night, I forgot to take a photo but it was lambs' liver, onions and rice.

Spotted outside a corner shop this morning in Whiteinch, Glasgow. 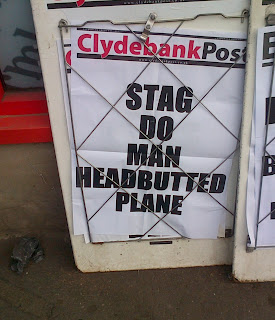 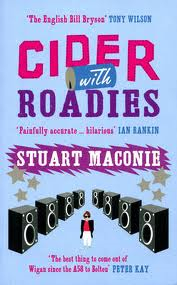 This is one of the fundamental issues I want to understand.

As usual, initial reading indicated a fairly comprehensible albeit unremarkable distinction between the format that a piece of literature might be written in eg poem/prose/letter/advert/radio programme and what the thing is about eg a love story/complaint about police brutality/effects of gravity.

Next one could, if one so desired, consider how form can influence content and vice versa. So while a letter about police brutality might have a certain effect, a poem about the same thing might have an altogether different effect.

So far so straightforward.

But when one looks at form versus content in the context of philosophy, which is my primary interest, things quickly escalate to the incomprehensible.

"Form and Content are philosophical contents concerned with the contrast between the appearance (or significance) of a thing and its essence or existence. Form is the mode of existence, expression or internal organisation of the Content of a thing, while Content is in turn the totality of relations and potentialities of the same thing.

The historically earliest concepts of Form and Content identified Content with a ‘formless’ matter and Form with the structure of that matter, but such a concept which allows reality only to Form and reduces Content to a wholly abstract “thing-in-itself” is conducive towards a metaphysical understanding of things.

Form and Content are a Unity of Opposites: they are two aspects of one and the same thing, which in the process of development of the thing and in its cognition, interpenetrate one another, interact and transform one into the other - Form becomes Content and Content Form."