The need to electrically isolate a section of an electrofrog point from the rest of the layout and then wire it up from a separate power source was mentioned in yesterday's blog.

At least one part of that tedious process is easy to achieve, namely the isolation.

As one knows, rails are connected to each other using metal fishplates/connectors. Well, plastic insulating fishplates are available. 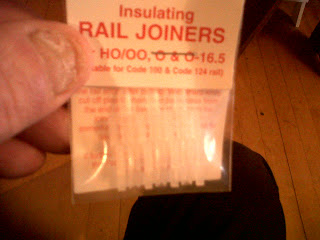 So, at the lhs of the points in the diagram below, one uses metal fishplates at F so that power passes to the rails of the points from the main rails which adjoin them.

Then at E one uses plastic fishplates so that the adjoining rails are physically joined but not electrically joined. One then solders wires to that blue and red isolated V section A-D-B, controlled by the switching device (mentioned yesterday), so that it gets power that way. 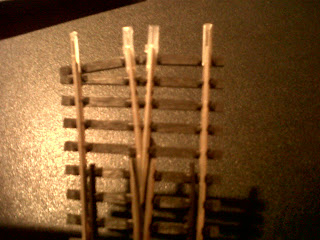 Perhaps it is difficult to see here, but the far left and far right fishplates are made of metal and the middle pair are made of plastic.

Heard a fascinating interview on Radio 3 this morning with the young American pianist, Jonathan Biss.

He articulated my views about Beethoven's greatness. I tried to jot down his comments verbatim.

Basically, he was addressing the question of who is the greatest composer: Mozart, Schubert or Beethoven. Bach wasn't mentioned.

He said that he didn't like the question but what he did find was that more than any other composer, Beethoven had "a greater force of personality" and that when you listened to a piece by Beethoven "it knocks everything else out of your memory." That one was "completely overtaken by it".

He believed that more than any other composer Beethoven felt "the need to compose, the need to express himself" and that this need was communicated "viscerally" in his music.

And crucially, (for me anyway), Biss made this comment re Mozart and Schubert. Beethoven's music "doesn't move me more than the music of Mozart or Schubert" but with Beethoven, alone, he was aware of the "physical presence of Beethoven".

I think that is a brilliant analysis by Biss of the way Beethoven affects me. Yes, Schubert's piano sonatas, duos, impromptus and moments musicaux never fail to move me, but Beethoven's piano sonatas seem to wrestle with me physically - or perhaps, me with them.
Posted by Tony Morris at 13:47