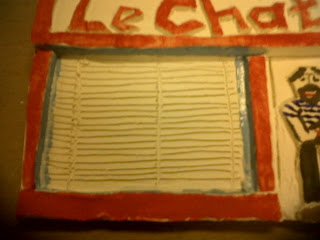 I think the proprietor of this establishment looks better from a distance!

The teacher of the class felt that the Venetian blinds should be a different tone from the other light areas on the tile. To do this she told me to brush a granite coloured underglaze (paint, in other words) into the grooves of the blinds and then sponge off the excess paint - but only partially. This would leave the blinds a shade or two darker than they were and also increase their definement by having the darkened grooves. To prevent the paint going all over the window surround and to produce a nice bright surround to the blinds you will see a pale blue colour. This is masking fluid which one paints on and then peels off like tape when one is finished. It stops paint going where one does not want it.

Unfortunately, I forgot to take a photograph of the tile at that next stage. It has now been glazed and is in the kiln for its final firing. Next week it should emerge all glossy and ready to hang on the wall. It's too big for the railway. 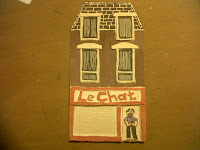 In case anyone didn't see the whole tile in its pre-masked stage...

You can see how the blinds will benefit from the above described procedure. And, the chappie looks more believable from a distance.

Here are some pop videos where the cameraman follows the singer walking through city streets - presumably miming. I seem to be very partial to these scenarios. As a general rule, I much prefer city life to life in the countryside.

Praying when you're tired:

Many years ago, attending a lecture on the nature of prayer, a member of a religious order which was not enclosed but devoted itself to social work, said that sometimes after a hard day's graft helping all sorts of people in need, she found her mind paralysed and unable to formulate meaningful prayers. At such times, she found gazing at religious icons or other sacred works of art to be an effective substitute.