.
Take a look at this truncated diagram of the layout - the station section. Each single line in the diagram represents a length of track.

As it is, trains to or from platforms A, B and C are restricted to emerging from or entering the station on line 1.

Likewise, trains at platforms D and E are restricted to using line 2.

To add the flexibility necessary for trains to switch between lines 1 and 2 requires an additional 4 sets of points. 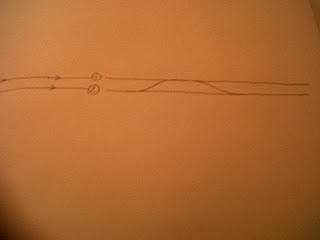 At the moment, the layout will end where 1 and 2 are on the diagram and the crossover involving the 4 sets of points will be added later. Otherwise, I'll never get anything done, because each set of points requires hours of wiring and hole-drilling not to mention the purchase of polarity switches and points motors. Nevertheless, in order to get on and lay the station track, I need to know how far apart the emerging tracks should be at 1 and 2 so that a seamless join to the crossover can be made at the later stage.

Therefore, I laid out the relevant points and a few pieces of straight track to ascertain the gap between 1 and 2. The distance between the outside rails of  the two tracks emerging at 1 and 2 is near enough 7cm. A bit of an exageration, but for me,  the establishing of this figure is as important as the work they have been doing beneath the Alps at CERN. Though, doubtless they don't use the term "near enough". 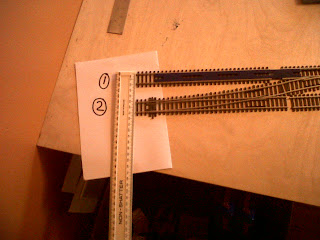 I saw Captain Beefheart and His Magic Band play live at Glasgow's Kelvin Hall in the early 1970s. The hall was only half-full and the performance very disappointing.

However, here are two excellent videos of the band performing on the beach at Cannes in 1969. (Not convinced that the soundtrack is live - but I may be wrong.)