Removed this label from a bottle of wine. I think it will make a suitable billboard advert for somewhere on the layout. 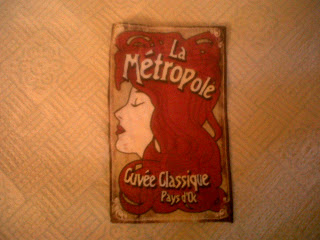 Accompanied by courgettes, onion and fried potatoes and grated Parmesan - which I forgot to photograph.

I remembered to photograph the wine. 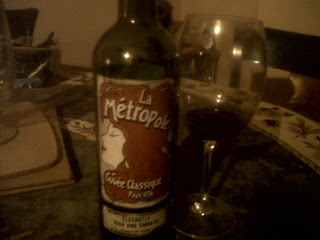 Not only do I never get sick of these sonatas, I enjoy them more each time they're played.

Discussed the practice of meditation with someone today. The secret, they said, was to let go of your thoughts during it. (I kept my own counsel at this point.)

It occurred to me yesterday that one approach to meditation, bearing in mind that one carries it out during relative silence, would be to listen for the voice of God; or, at least to listen.

I had in mind that passage in the Old Testament where God says that his voice will not be found in loud spectacular events eg thunder and lightning but would be found whispering quietly in the breeze.

I found the following discussion of the passage somewhere on the internet.

"There's a passage in the Old Testament that Christians especially love to quote. It's about "God in the gentle breeze!' The fact that we pick it out should put us on the alert - but we'll come to that. That passage is about Elijah's encounter with God. "There was a great wind, so strong that it was splitting mountains and breaking rocks in pieces before God, but God was not in the wind; and after the wind an earthquake, but God was not in the earthquake; and after the earthquake a fire, but God was not in the fire; and after the fire a sound of a gentle breeze. When Elijah heard it, he wrapped his face in his mantle..!' (I Kings 19:11-13). In another translation it's even more striking: instead of the gentle breeze there is "sheer silence" (NRSV). Other translations say, "a still small voice," or "the sound of a soft breath” or "a quiet whispering voice!'"

So, a two pronged attack today:

1) Letting go of any thoughts that came before my mind. That proved impossible.

2) Listening for the voice of God. No joy on that front either.

Ironically, for the first time in ages the wind made its presence felt today and I did attend to its occasional whining during the 30 minute session.