Decided to shorten the chimneys:


Also, filled in the gaps where the narrow front wall connects with its two bigger neighbours. Used Polyfiller to do so. 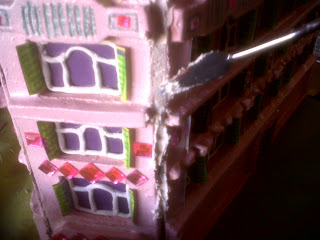 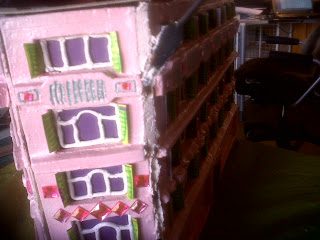 Will paint the filler pink, of course.

This afternoon went to Glasgow's Kelvingrove Galleries  to see a free performance of Modern Dance. Visually very pleasing to the eye but the music was disappointing. Both dance and music were purportedly influenced by mathematical patterns and randomness. Just looked like any other modern dance to me and the music which was in the trance genre, I found old hat.

Here are some photos taken from my phone. 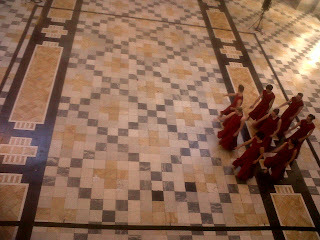 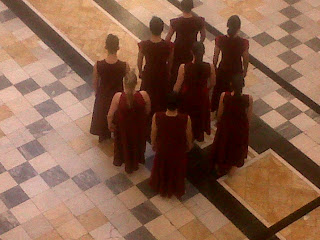 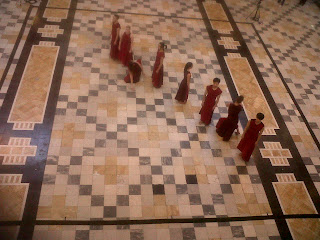 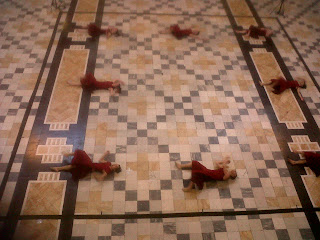 The official photographer was very busy and at one point spent ages lying corpse-like on the floor to get a better shot. 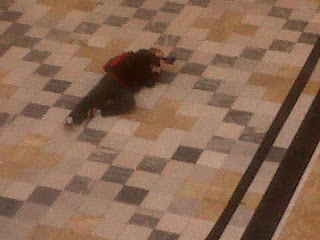 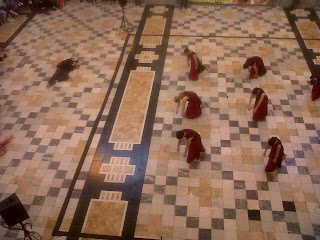 You can infer from these images that I elected to watch the performance from above in the hope of better appreciating the 3D nature of dance - can't say I sensed that I was appreciating that.

Turns out he was right to be surprised.

Here are the two paintings 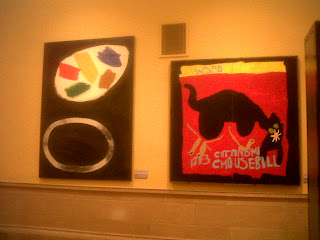 Admittedly, the Knowles is similar in style to Motherwell's.

This kind of error worries me greatly. It would be safer for me never to open my mouth when supposedly recalling events from the past. I was positive that the paintings were by Motherwell - absolutely positive!

Yesterday saw my return to meditation after a gap of at least 25 years. (Not that I did any more than go through the motions back then - if you'll forgive the poor choice of words.)

Aimed at 30 minutes and decided to go for the cross-legged position.

Problem 1: Couldn't get into a cross-legged position - simply couldn't bend my legs away from the vertical. 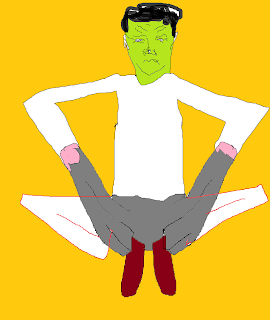 Problem 2: The foreman in charge of the men repairing our roof rang the bell when I was only 20 minutes into the session. Earlier in the day he had assured me that there was no need for any further consultation. I had to get up (with difficulty, no shoes or socks on and having to do up my trouser belt, locate my glasses and then find the door keys).

Effectively that was the end of the meditation.

I pictured various feckless individuals and imagined their foolish intonations and pronouncements.

For 10 minutes or so I held these images at the front of my mind.

At the same time I repeated to myself,  "We are all God's children."

Then, it occurred to me, that perhaps someone, somewhere was carrying out exactly the same exercise but with one crucial difference.

Perhaps they were holding up an image of me before their mind's eye as an example of a feckless individual making foolish pronouncements in a foolish intonation. Perhaps they were using meditative practices to help them see some worth in me!!!

(This is a version of Sister Veronica Blount's advice that instead of us seeing others as if they were weeds in our garden,  we should consider the possibility that we are weeds in their garden.)

After about  10 minutes the visual imagery faded and I found my self singing (to myself), "Jesus loves me, yes I know, because the Bible tells me so."

This morphed into  "Jesus loves them, yes I know, because the Bible tells me so."

This went on until the front door-bell rang.

The high point of the session was the seamless transition into the final stage of chanting and the accompanying sensation of being in a daze. Spent the rest of the day in a state of empowerment.

PS During my visit to the art galleries this afternoon, it occurred to me that a possible future session of meditation could consist of  me sitting in front of one of the Renaissance religious paintings that abound there.