There are a few permutations available for joining together the 4 walls of my latest ceramic building. 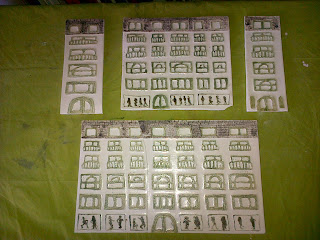 My desire is to create the effect of an "urban canyon" at the far end of which the facade of the church dominates the scene. 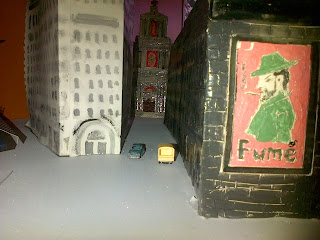 Where the white card mock-up building is at present will be the situation of the ceramic building.

But, is it best to have the longest wall of the building forming the side of the canyon, or for that wall to be placed opposite the "pink" building?

In other words, should the walls be joined as in A or B below. 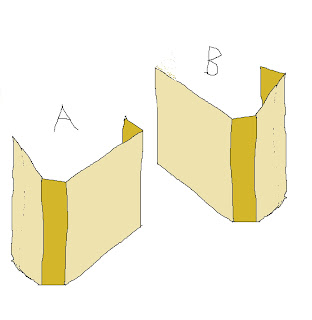 Tried out a few arrangements, including one where the black tenemental building has been shifted away from its current position of being flush with the station façade.

I think I'll settle on formation, B.

Played by the Royal Flemish Philharmonic orchestra which was founded in 1956 and whose home concert hall in Antwerp, the Queen Elizabeth Hall, is being totally re-vamped at present.

Here is a picture of the projected end result. 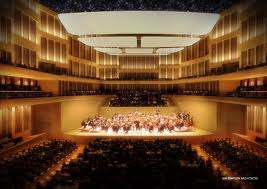 I've attended 3 beginners' courses on the Tango over the last 9 months. (2 and a half actually because I am not going to  the final two lessons in this session.)

I simply cannot do it.

There are several problems - some of which are surmountable but are not worth spending the time and effort so surmounting because the core problems are insurmountable.

The surmountable problems are these:

I mastered the correct posture in the end which is shoulders back, stomach in and pretty well ramrod-straight but with a tilt forwards. The idea of the tilt is to keep one's feet away from one's partners - AN EXCELLENT IDEA. 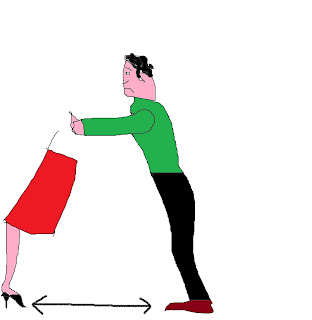 But, unfortunately, I was never able to maintain this posture when dancing with a partner. Perhaps massive dollops of practice would have solved this problem but in the end it didn't seem worth the effort if I couldn't get 3) and 4) right - see below.

Perhaps due to my age, I found great difficulty remembering sequences of steps. Again, massive repetition is required and, through dint of practising at home on my own, I did master a few such sequences. Unfortunately, in an actual dance their execution depended upon my successfully conveying to my partner that I was about to embark upon one such particular sequence and would she be so kind as to do the same sequence. I found it difficult to convey that message to my partner and she would end up doing a different sequence altogether - see point 4) below.

Problems 1) and 2) were surmountable with practice. But I came to the conclusion that problems 3) and 4) below were not.

The Tango is based on the idea that the male leads and the female follows. The male determines which direction the female is going to take and she accommodates her movements to what she senses is the male's intention.

I never felt in the slightest degree, assertive. Assertiveness is a completely foreign sensibility to me. I don't disapprove of assertiveness, I just don't have it.

At all times, I wanted to accommodate my movements to what I sensed (often falsely) my female partner would be happiest doing. That's no good in Tango. That represented an insurmountable problem.

Unlike other partnered dances where there are shared sequences of steps that are agreed beforehand by the partners and each dancer performs their sequence at the same time as their partner and thus everything fits together, Tango is spontaneous.

The male conveys to the female what she should do next by subtle shifts in his posture. Even the decision as to which foot one should begin with is not determined through speech (although I always broke this rule and said sotto voce which foot was to be first) but by means of a shift in weight.

This mode of communication is at the heart of Tango and is as alien to me as assertiveness.

I chose to learn Tango since it is a very slow dance - basically walking pace, and because I can't stand other forms of partnered dancing nor their accompanying music.

One positive outcome has been that as a result of all the practice, the exposing of oneself to criticism and the self analysis, I became aware of how awful my posture was and have definitely improved that.

Also, it was a pleasure to witness such excellent tutoring - always thorough, tailored to the needs of the student and delivered in a non-patronising and inoffensive fashion.