Just a reminder of what I hope this station is going to look like. Based on the Gare du Nord in Paris, the first picture shows a cardboard cut-out of the station facade. Eventually, the cardboard cut-out will be replaced by the ceramic facade in the second picture. 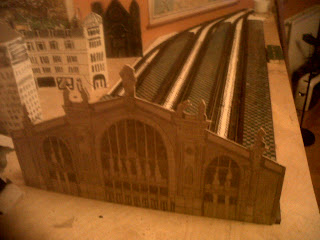 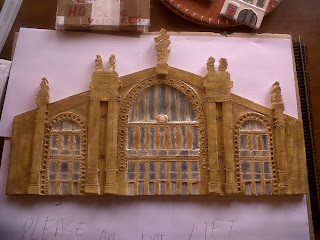 Completed my listening to Benjamin Britten's opera Billy Budd and look forward to listening next to Peter Grimes.

Here is a synopsis of the Billy Budd story downloaded from the Metropolitan Opera website. The story is based on a short novel by Herman Melville, he of Moby Dick fame.

Captain Vere, as an old man, looks back on his life at sea and the mysterious workings of good and evil.

Aboard the H.M.S. Indomitable during the French Wars of 1797. Early in the morning, the crew goes about their work. A cutter has been dispatched to board a passing merchantman and recruit the most able men for war service. It now returns with three impressed sailors, among them Billy Budd, an open-hearted, good-natured young man. Questioned by John Claggart, the master-at-arms, Billy reveals a stammer when trying to explain that he was a foundling. His shout of farewell to his former ship, The Rights o’ Man, misleads the officers into believing that Billy is a potential source of danger in rousing dissent among the other sailors. They instruct Claggart to keep an eye on him. Left alone, Claggart voices his bitterness and disdain for the officers. He orders the ship’s corporal Squeak to use every opportunity to provoke Billy. The old seaman Dansker warns Billy to beware of Claggart.
In Captain Vere’s cabin, the officers express their dislike of the spirit of the French Revolution, which they hold responsible for the recent naval mutinies at Spithead and the Nore. They mention Billy as a potential troublemaker but Vere disagrees and tells them that all he is guilty of is youthful high spirits.
That same evening, the men sing shanties on the berth-deck. Billy discovers Squeak rummaging through his belongings and attacks him. Claggart intervenes and, realizing his man has bungled things, has Squeak arrested. His hatred of Billy now stronger than ever, Claggart forces the Novice to try and bribe Billy into leading a mutiny. But the Novice’s efforts only rouse Billy’s anger. Dansker appears and calms Billy down. He repeats his warning to avoid Claggart, but Billy is certain he has nothing to fear from him.

Act II
It is several days later. Officers and crew are eager to engage the enemy but the ship is shrouded in mist. Claggart begins to put to Vere his case against Billy, when a French sail is sighted and the air begins to clear. The captain orders to give chase and the men prepare for battle. A shot is fired but misses the target. The wind drops and the mist returns, putting an end to the pursuit. Claggart once again approaches Vere with his complaint that Billy is planning a mutiny. Vere refuses to believe him and sends for Billy to confront his accuser.
Alone in his cabin, Vere reflects on his conviction that the young sailor is innocent. Billy arrives, then Claggart, who repeats his charges. Asked to defend himself, Billy gets so upset that his stammer chokes him. He strikes out at Claggart, killing him on the spot. Vere, shaken, summons his officers and a drumhead court is constituted. Billy admits the deed but can’t explain why Claggart should have wrongfully accused him. When the officers turn to Vere for an explanation, the captain refuses to respond. Faced with no other choice, the court pronounces the death sentence.
Early the following morning, Billy calmly contemplates his imminent death. Dansker appears with food and news that the ship is now indeed close to mutiny, the crew determined to prevent Billy’s execution. Billy tells him to stop them—he has accepted his fate.
At dawn, the sentence is pronounced before the entire company. Billy blesses Vere and is hanged.

Epilogue
The old Vere is still plagued by doubt if what he did was right. He acknowledges that he could have saved Billy, but the condemned man’s blessing has given him comfort.