Readers of a certain age will remember some form of slot car racing from their teenage years. In the UK, the dominant manufacturer was Scalextric. 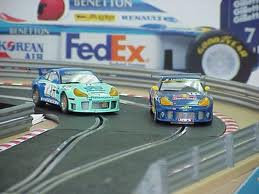 However, it turns out that there is such a thing as HO scale slot car race tracks. Perhaps this would be an alternative to the Faller Car system. I don't understand how one controls the motion of the Faller vehicles. They seem to be basically on or off. Whereas with slot cars one can control the speed of the vehicles.

These are the most apposite pictures I can find from the web at the moment.


Will consider this more.

Often, saying the right thing is the most important way that one can perform one's Christian duty. And, speaking as an inarticulate fellow with a propensity towards making the awkward utterance, I have found that praying for the right words to come does work.

"And for me, that utterance may be given unto me, that I may open my mouth boldly, to make known the mystery of the gospel." King James version.

"Pray also for me, that whenever I open my mouth, words may be given me so that I will fearlessly make known the mystery of the gospel." New International version.

And somewhere in the Old Testament, I can't find the reference, Moses or Aaron prays for the right words to come when speaking to the masses.