I used to think that my spatial intelligence was above average.

Over the past few years, I have come to doubt that; especially on the squash court. A significant part of squash is being able to work out the concatenation of angles that the ball can travel along as it bounces off a succession of walls.

I'm poor at that compared with my opponents. I used to think that it was a matter of speed of thought: that given paper and pencil I could work out the correct angles for a successful trajectory, but that in the middle of a fast rally I was just too mentally slow to work them out in the necessary matter of milliseconds.

Now I'm not so sure.

When I tightened up the screws that I've driven down through the baseboard into the tops of the supporting legs, one of the legs turned inwards from the vertical.

Everything was OK prior to tightening the screws (represented by orange lines in the diagram below). 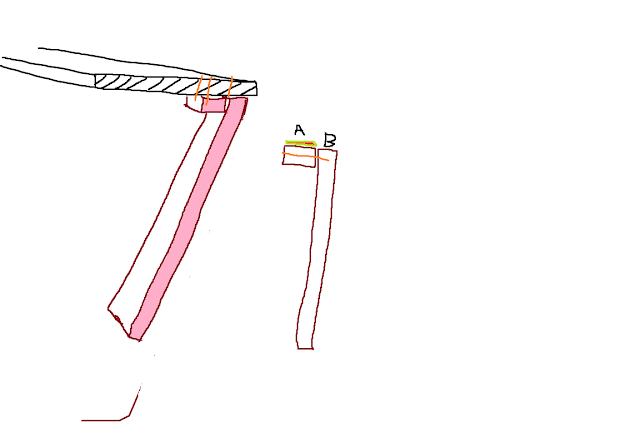 Bearing in mind that the two components of the leg (A, the cross member and B, the leg itself) have themselves been screwed together, I suspect that the top surface of the combination is not level.

Therefore, if I raise the level of A with, say, a slither of cork matting then that will divert the leg back into a vertical path.

BUT, maybe the slither of cork should go on top of "B"!!! I simply cannot visualise the spatial implications of introducing the cork matting.

Believe me, I have spent a lot of time trying to work this out - and with paper and pencil.

It will have to be trial and error.

It's mentally painful experiencing an unsolvable problem that one knows would have seemed easy to solve ten years ago. 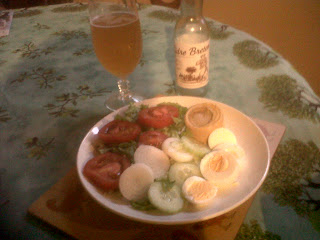 That Breton cidre is very pleasant.