I've decided to abandon the weathering approach to track portrayal.

I came across a very impressive website yesterday by a professional modeller, Aidan Campbell. His models are brilliantly and in fact professionally weathered.


He writes almost philosophically about the nature of weathering and the importance of looking closely at what one wants to re-create. That is his mantra: observation.

He then says this:


between modelling a weathered finish, and weathering a finished


model. The difference is perhaps subtle when written down like


this, but huge in terms of approach. The former is always preferable."

The obvious truth of this statement stopped me in my tracks. He is absolutely right in what he says.
But the effect of  reading it was to make me go in the opposite direction; and  then I had my blinding realisation - to coin an awkward phrase.
Look at the ceramic Gare du Nord with which I am so pleased: 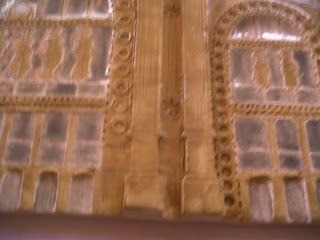 From any angle and under any light this is obviously a ceramic model. It states boldly that it is not seeking to deceive the eye but rather to arouse the sympathy of the beholder.
I have touched on the dichotomy of weathering and impressionism many times before in this blog. Recently I have found myself (unhappily) in the camp of the weatherer. But today I can announce my escape.
In fact, I am defecting from that dichotomy to another opposition: weathering vs decoration.
From now on I am going to increase the ceramic content of the layout. Even the platforms are going to be ceramic - those prepared wooden platforms will have to go in the garage to be eventually thrown out in 5 years time.
The railway tracks will be decorated rather than weathered; and will be done so as to enhance the ceramic platforms. (Not quite sure how.)
So it is farewell to ballasting and spray paints!
My Manifesto can be summed up in one word DECORATION.
+++++++++++++++++++++++++++++++++++++++++++++++++++++++++++++++++++++++++
Radio 3: Choral Evensong.
The joy of attending Mass lies in the encounter with Christ during the Eucharist.
But there are  other forms of worship in the Anglican and Roman Catholic Churches that do not involve the Eucharist.
To calm me down after the discovery of my new dichotomy, I went to BBC iPlayer and re-played last week's Choral Evensong from Salisbury Cathedral.
What Christian purposes does this sans-Eucharistic service perform?
+ There are readings from the Bible to be reflected upon.
+ Christ said that wherever 2 or more are gathered together in His name, then He is there. Clearly that applies to those attending evensong.
+ The liturgical prayers and texts are phrased in beautiful language.
+ Sometimes those beautiful words are sung to beautiful music.
+ There is a meditative atmosphere.
+ And one is reminded about the presence of God in one's life.
On that last point, I could easily have re-played an episode of Desert Island Discs while writing this blog, but decided that I have been horribly selfish today and need a reminder of how I should be thinking and behaving. 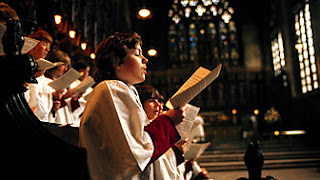 ~~~~~~~~~~~~~~~~~~~~~~~~~~~~~~~~~~~~~~~~~~~~~~~~~~~~~~~~~~~~~~~~~~~~~~~~~~~~~~~~
Last night's dinner:
I had thought that samphire was only available in Norfolk. But when walking through Helensburgh yesterday passed a fishmonger who was selling it. Presumed it must be Scottish and was slightly worried about the fact that it had come all the way from Normandy - could it possibly be fresh?
In fact, it was so tender that one could have eaten it raw. I simply stir-fried it in a mix of butter and olive oil for a couple of minutes.
Actually, it was vastly superior to what we had eaten in Norfolk last week.
Post-script. As I was being served, a loud woman entered and said to the shop in general "Oh, is that that  Samphire that people seem to think so fashionable at the moment?" Or words to that effect.