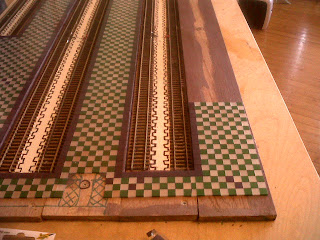 I'm approaching my self-enforced aim to learn the Tango with a massive burden on my back.

But, the opposite view abounds everywhere one looks.  For example, one Tango website begins with this quotation:

"You must work very hard to become a natural golfer."  Gary Player


One of my regular squash partners has 'modern dance' as a hobby. He came to it late in life and says it took him several years to  acquire any kind of success in it. He believes that everything in dance is learned and that the trick is to practise, practise, practise until things become second nature. He didn't use the phrase 'second nature', instead he talked of building up muscle memory.

The guest on today's Desert Island Discs was the potter and writer Edmund de Waal. Despite my attendance at a ceramics evening class, I have no special interest in pottery or potters. But De Waal did make some interesting points.

Firstly, he emphasized the tactile satisfaction integral to pottery and said that 'touch' was almost a taboo conversational subject in Western cultures; that there was no developed vocabulary for talking about such an important part of being human. He compared the West with other cultures where 'touch' was a routine topic of conversation - or so he claimed.

Clearly, 'touch' has a relevance to the Tango. I'll mull that point over in case there lurks within it some explanation of my difficulty (and embarrassment) in learning to dance.

His second point relates to the issue of 'practice makes perfect'. In pottery one does the same thing over and over, again and again. Whether it be yet another session on the potter's wheel or yet another simple action with the hand to shape or smooth the clay, pottery is a highly repetitive business.

But he extols that repetition. Each repetition of even the most simple action is in fact unique. Every time one performs it one has the opportunity to improve it, to adapt it subtly to a new project. Furthermore, since one is investing oneself in every action then, as one grows as a person, one is inevitably investing something different in that action.

This is a different slant on the nature of practice.

It offers one a different attitude. Instead of seeing practice as 'something that one must do' and  patting oneself on the back after a gruelling practice session and consoling oneself with the thought that eventually one will master whatever it is that one is practising; de Waal seems to be saying that one should treat each repetition as a special event in itself.

So, when I approach a 20 minute session of pacing/mincing/prancing/stumbling up and down the hallway I should not demean these steps as inferior executions of the Tango walk which one day in the future will lead to superior executions.

Instead, I should esteem each of these practice steps.

Pizza with olives, artichokes and anchovies. 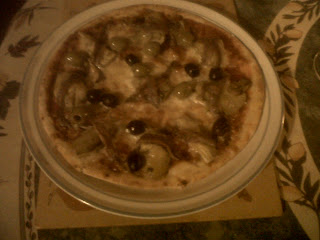 Washed down with a Bordeaux from Wine Society. 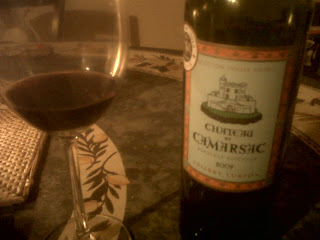