Decided to lay the remaining whole tiles for platform 2. I'll fill in the gaps tomorrow or Wednesday.

Not entirely sure I've done it properly. 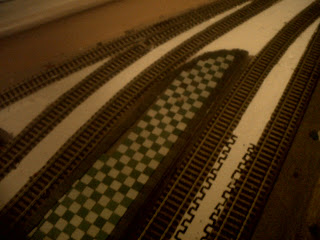 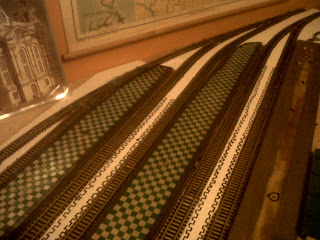 Mine was Chicken Liver Pate followed by Hake and boiled potatoes. Spouse had a pizza with artichokes and black olives which I finished off.

His show was very, very badly attended at the Pavilion and that killed the evening a bit. But, he was very funny for the whole of the evening.

But it got me thinking about present day comedians. Are there any who are funnier than Mark Watson?

Not many. But, hardly any current comedian would appear in my top ten. I did make such a list in an earlier blog. Perhaps this list will be different. (I can't be bothered going back to look.) What I was thinking, though, was that much as I like English whimsy, US comics stand the test of time.

So here is another list of my top ten comics/comedians/comic actors:

9. Kenneth Williams and the Round the Horne team