Review of past 13 months

Just in the nick of time I realised that I couldn't sit the facade directly on the baseboard. I would have to elevate it by approx 1/8th of an inch to allow for a road surface to be laid in front of it, at some point.

So I glued down a strip of cork on which to sit it. 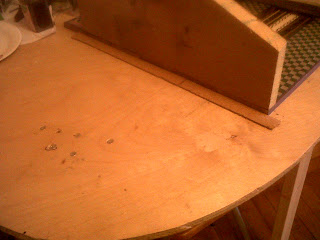 Then I mixed up the epoxy resin. 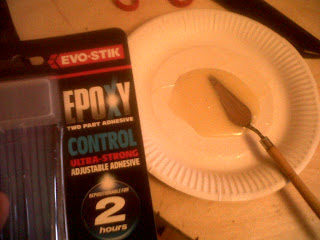 Noted that it was suitable for wood and ceramics, the two surfaces involved. 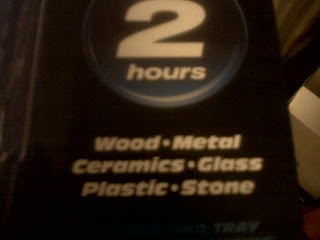 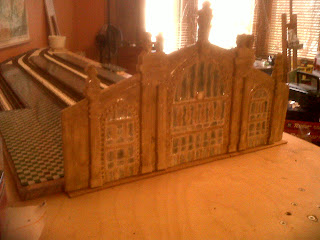 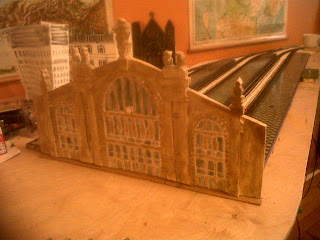 Next task is to install a canopy behind it.

Arriving at the conviction that the original concept for the layout was correct and that its manifestation would be aesthetically rather than verisimilitudanally driven.

(Bit of a triumph there, the spell checker came up with "no suggestions" for "verisimilitudanally".)

1) Eels - for me, profound lyrics paired with an almost  uncategorisable pop sensibility: is it folk? is it rock? is it blues? is it in the singer-song writer tradition? Definitely unique and definitely comes under the heading of 'Americana'.

2) Hot Chip and Teenage Fanclub - provided an upbeat, elevating and happy sound track to the past year.

3) Schubert's song cycles - these elicited a sea-change in my tastes. The exhilarating live performance of the Miller's Song by James Gilchrist at the beginning of the year followed by the exploration of recorded versions: eg Aksel Schiotz, Hans Hotter.

I have had in my collection for many years a Beethoven song cycle but it reminds me so much of my father singing that I can't listen to it without getting tearful.

Coldplay at the SECC: epic arena rock performance, couldn't fault it in anyway. 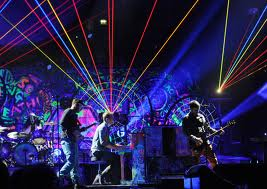 Silver Apples at Mono: in a tiny little cafe/bar in Glasgow, Simeon Coxe III, now in his 70s and the only surviving member of this pioneering electro-pop outfit, gave a terrific concert standing alone, like a lab technician, behind a panoply of gizmos, synthesizers, drum machines and possibly even a washing machine. 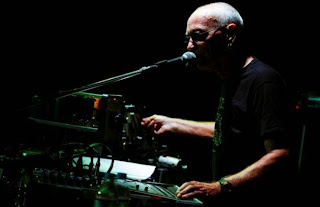 Hot Chip: sold out concert at the O2 Sauchiehall Street. Great bonhomie between band and audience BUT preposterously loud. Enjoyed it but vowed never to attend a rock concert again (See below).

Ginger Beard Men: 2 young men with basically a laptop each at the tiny King Tuts venue in Glasgow. Utterly, utterly wonderful and not at all loud. 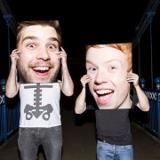 Stereophonics: at the O2 Academy, Glasgow. Went solely to hear Kelly Jones' Welsh voice. Was expecting humungous levels of noise so purchased a set of specialised earplugs which transformed the whole experience. Can now go confidently to any concert I want. 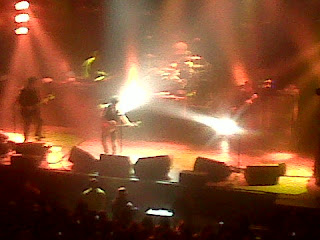 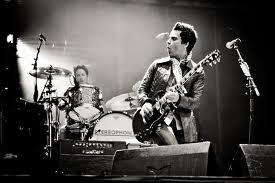 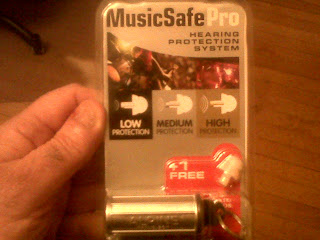 Probably the bravest step I have ever taken was to attend the weekly Tango lessons and also attend the Tango Ball and the Tango Club. Can't say that I'm much more than a clot on the floor still, BUT have arranged a single one-to-one lesson for next week prior to resuming the lessons in mid-January. 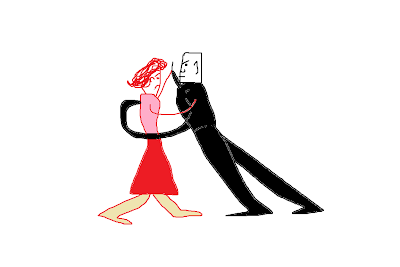 Best of all was this book by Robert Irwin - really opened something within me.