Well, the clay has still not been delivered to the ceramics class; so plan B was put into action - making some HO scale motor cars.

The only clay available was terra cotta which nobody seemed keen on; and, I can understand why. It's messy to the hands and I found it stuck to whatever tools you were using.

However, Pauline the lecturer suggested that instead of trying to shape the little car bodies with my hands as one would say with plasticine, one could make a very crude shape (bonnet, roof and boot, so to speak) and then let the clay partially dry out to what is called 'leather-hard' and then carve the car shape with various tools.

I made several car shaped lumps to approx HO size (matching them against an HO model for guidance) and then speeded up the drying process with a hair drier for about 5 minutes.

I made 2 little cars. They were a bit mis-shapen but OK for a first attempt.

Here are some photos of the evening's work. Everyone said that the cars looked like little chocolate sweets. 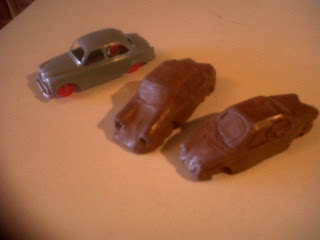 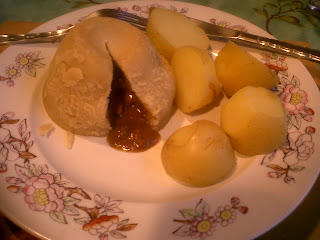 The first lesson was from Proverbs chapter 2 and a phrase was used: "Let wisdom sink into your heart."

I like this image of acquiring wisdom by passive means. Simply trying to apprehend wisdom through rational means I believe (at least for me) is bound to result in wisdom existing simply as an adjunct to one's self - as merely something that one knows - rather than becoming a part of one's very being.