As you probably know there is a whole approach to art that uses "found objects".

For example, I'll want railings outside most of the windows. So, what objects could I find that I could use to suggest railings? I haven't done any serious looking yet, but one possibility that springs to my mind is those plastic hair clasps that one occasionally sees.

In the sketch below, I haven't been able to rotate the "clasp" to the horizontal so it looks a bit wonky. But, I hope you get the idea. 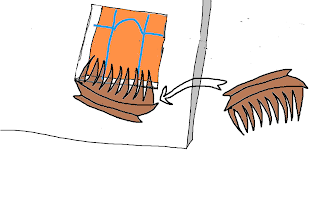 I think it's highly unlikely that I will use hair-clasps but perhaps you can see the potential in the "found objects" approach.

the commercial radio station (I think it's either Real Radio or Radio Clyde) that plays non-stop in the office. It plays a mixture of up to the minute pop songs interspersed with songs from 3 or 4 years ago. I really enjoy it. There is vastly less chatter than on Radio 1.

An example of the new policy of smaller portions.

Unfortunately, ate a Fry's Cream after it.