Have this slightly mad idea for ballasting the track.

I'm going to track down - if you'll excuse the pun - some white ballast or at least very light gray and scatter it over the track.

But between the tracks I'm going to paint the ground gloss white. I think this will unite with the glossy ceramic buildings, especially the new one which is currently being constructed.

First coat is in matt white. 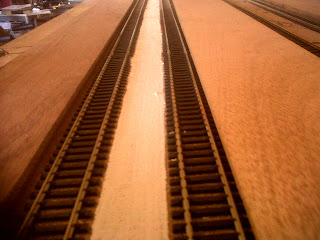 This band was formed in San Francisco in 1994 and this album was released in 2007.

A kind of mad off the wall guitar group with a female singer. 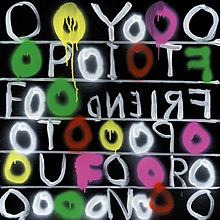 This cover was designed by the Scottish artist David Shrigley. He is now famous in that kind of Turner Prize world; especially for his black line drawing cartoons which do nothing for me.

Love his cover design for Deerhoof, though. 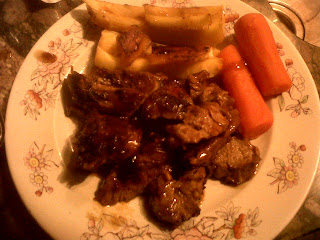 Shoulder of lamb, parsnips and carrots.

Continuing to walk around the house, up and down the stairs and even up the street with my new Tango gait of knees brushing together and pointing the toe. So far have neither been arrested or had rotten fruit thrown at me, but it's early days yet.

Practice with wife went quite well last night now that she is taking much longer steps as she moves backwards. I think she finds it a boring dance and asked why I hadn't enrolled for a Cha Cha Cha class instead.