Latest issue of the SNCF magazine arrived yesterday by post. Because it's quarterly I always forget when it's due so it's a joyous surprise when it appears.

It's sad that passenger trains across Europe look pretty much the same these days - basically, separate locomotives are not involved and the motive power is hidden within the passenger cars. What gets the folk in the SNCF Society really animated is spotting one of the old locomotives in action. In the bottom photo above one can see an example of the classic electric SNCF locomotives pulling what looks like a modern broken down train. Apparently, there are still some lines in France where locomotives still pull passenger trains but they are getting increasingly thin on the ground.

It's pointless wishing that one could rewind one's life and so I only apply that "what if" question to trivial matters.

But, in fact, there are two trivial events that I would love to have witnessed and feel real twinges of regret when I realise that the opportunity to see them has gone for ever. Both are musical.

1) In 1967 Tyrannosaurus Rex (Marc Bolan and Steve Peregrin Took) played a small gig in Glasgow. Several boys in my year and the year above me had tickets and talked excitedly about the forthcoming event in the days that preceded it. I was desperate to go but was simply not in that in-crowd and would not have been welcomed if I'd tried to tag along.

The following day, the descriptions of the gig were brilliant. Marc Bolan sitting cross-legged on an Indian rug in some small upstairs hall above  shops somewhere near Sauchiehall Street. There seemed to have been no actual stage so audience and band were within touching distance: an ethereal/magical/musical/euphoric/intimate atmosphere was conjured up. 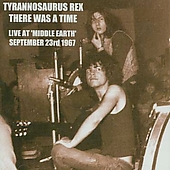 This is the nearest I could find to a photo of that era.

Amazingly, my regular squash partner told me the other day that he had been there - he had attended that gig. And he deemed it as amazing an experience as I had been led to believe all those decades before. One recollection he had was that Marc Bolan seemed to have been playing a cheap guitar from Woolworths.

2) Daft Punk's Pyramid tour. In 2007 the French electropop duo Daft Punk toured the world with this amazing stage set. Fortunately, longish clips of the tour are available on youTube. Not seeing that tour is my second regret. 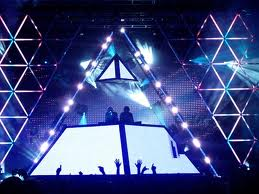 I told you they were trivial regrets. 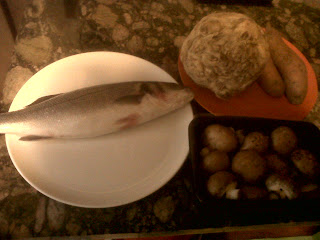 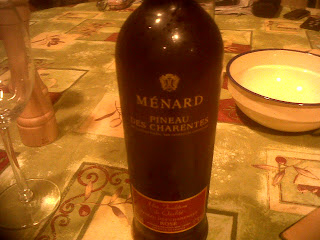