Yesterday evening, I walked to the Cathedral of St Pierre; the odd drop of rain but I'd borrowed a very smart black umbrella from the Hotel. 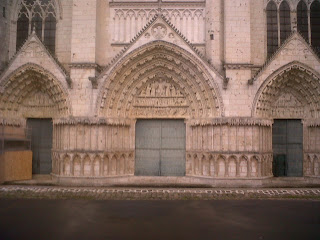 I arrived at the beginning of a session of Adoration of the Blessed Sacrament. The cathedral was absolutely still, absolutely silent and almost in complete darkness. Eventually, I found the group of devotees at the back of the church in a side chapel. Mostly young people, all kneeling and all gazing at the monstrance which held the Host.

The monstrance being a decorative piece, like a star on a stand which holds a circular piece of bread blessed by a priest and thus deemed to be the real presence of Christ. 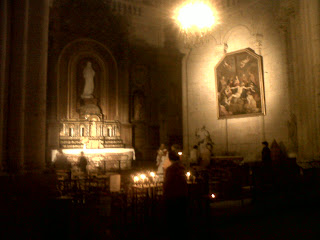 The session finished with the singing of Salve Regina which is always sung in Latin and so I was able to join in. Memories of the Divine Mercy prayer group I used to attend in Glasgow came flooding back to me because there too we always finished our meetings with that hymn.

My table at Le Table du Jardin was booked for 8pm. I arrived a few minutes early and was given a table right at the back. Single diners are usually deemed a bloody nuisance to restaurants. But I was treated royally throughout the whole evening.


There were two cock ups at the restaurant - neither disastrous.

I can't be bothered with Rose wine. I wanted a pichet of the house white Loire - cheap and cheerful. I pointed to this item on the wine list and the waiter/proprietor nodded but seemed to express his agreement in a string of incomprehensible French words with what sounded like Rose somewhere in the middle of the stream. I re-iterated that I wanted Blanc and not Rose. God knows  where he got the idea I wanted Rose from in the first place.

2 minutes later he placed a pichet of Rose on the table adding the words Cotes du Provence. Usually, I would have sent the stuff back but I wasn't actually in the mood for drinking alcohol in any case and thought I would just cope with it. The liquid did look pleasing to the eye. And, it turned out to be delightful - thirst quenching and pleasant in the mouth. Now I'm a convert to Rose.

The second error was when I ordered a white coffee at the end of the evening and an espresso arrived. I stared at the cup for a few minutes while deciding what to do when suddenly the arm of the proprietor moved across the table, picked up the coffee and with quite an apology took it away to replace it with a white one.

I walked through the much pedestrianised town centre to Mass at the Church of Notre Dame - a much older congregation than last night's. 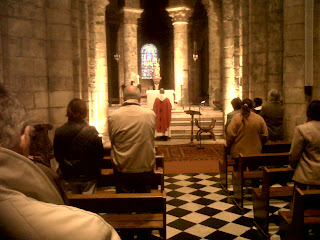 Afterwards sat in the market square and had a pains aux raisins and cafe au lait and watched the world go by. The first picture is of a pile of bread on the counter of the small shop where I bought the coffee. 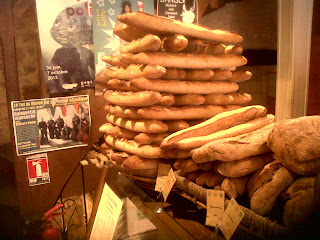 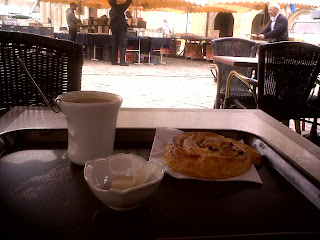 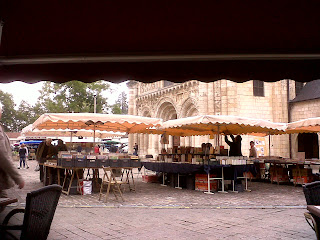 Then I walked down the hill to the station and travelling 1st Class went by TGV to La Rochelle. A lovely journey of about 100 minutes across the arable plains of France.


The weather was lovely and La Rochelle was, to use one of my wife's favourite words, heavin'. There are dozens of cafes and restaurants in La Rochelle's tight labyrinth of streets. I managed to get a table on the pavement and ordered a galette (buckwheat pancake with a filling of mushrooms, cheese and ham) and a lager.

I then read my new excellent book by Colin Wilson about life in 1950's London, "Adrift in Soho". 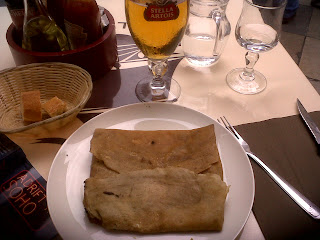 There was a lot going on in the city and there was a carnival atmosphere.

Near to the harbour, the longest treadmill I'd ever seen had been set up. It was basically a red catwalk and as far as I can gather any local amateur clothes designers could wear their own creations and walk up and down it. 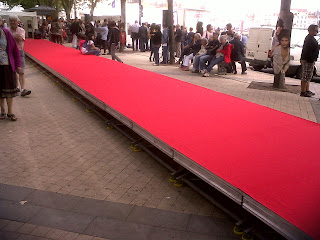 Then back by TGV to Poitiers.