Back to worrying about ballasting:

Still not sure how to proceed with ballasting my track. Technically, I know how to do it (see earlier blogs). But I haven't come up with the right combination of colour and type of ballast (fine or medium grains).

On a whim, painted a streak of browny-gray emulsion between the tracks at RHS platforms.

Then scattered some fine grain, buff coloured, ballast between the sleepers.


Not convinced by the result.

What I need to do is to set aside a week - yes, seven clear days - and do nothing but think this problem through. Otherwise, I'm going to end up with something second-rate.

I have been wrestling with this problem, admittedly sporadically, for the best part of the last decade.

Is music a phenomenon in itself or can it be reduced to other types of human creativity?

I was reminded of this issue this morning when listening to Radio 3 and a review programme of the String quartets of Janacek.

One of the quartets expresses in musical form the tale of a love affair. The Radio 3 reviewer at one point made the comment that he felt a passage in the piece was being played in "too mocking a fashion". I take it that the passage concerned was  a melody that had already been played earlier in the composition and perhaps been intended to evoke, say, "undying devotion" but was now being played later in the piece and as the love affair was falling apart in a manner to suggest cynicism towards the concept of "undying devotion". Thus it was being played in a mocking fashion - perhaps by slurring the notes or playing them exaggeratedly slowly or in some other manner.

But is the musical value of the piece dependent on the listener being able to make these connections between the sounds being made by the instruments and the meaning purportedly being expressed through those sounds.

A more obvious example. Where a symphonic passage is meant to express a storm  and all the woodwind instruments and percussion are going mad; need one  know that a storm is being portrayed in order to appreciate the loudness of the passage. If a listener had never witnessed a storm eg a nomad in the desert, would they then take nothing from the experience?

A packet of noodles with left-over cold chicken chopped up on top of it. 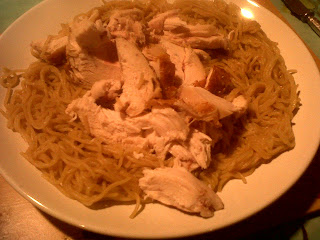 Washed down by a pint of milk.

Eels: Blinking lights and other revelations.