That title sounds like a chapter heading from a City and Guilds course in the 1950s.

Basically, I'm wondering how to take account of the sloping roof in my ceramic model building. 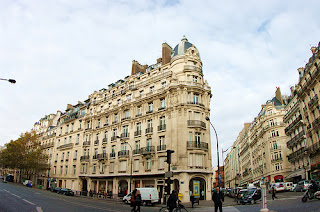 The building I'm aiming to model out of clay. 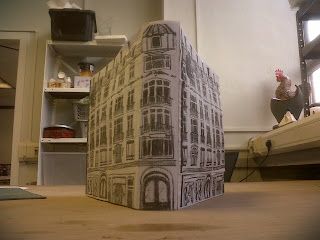 A cut-out model of same.


Obviously, the roof should slope back the way and then the attic windows and chimney stacks will have to be added.
But  structural implications follow from incorporating a slope into a vertical wall of clay. Look at these rough sketches. 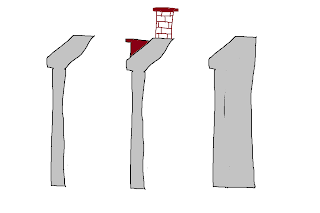 These are side elevations of a wall. The left hand figure represents a wall thickness of say 1.5cm. But can soft clay hold that angled shape when soft? And, it would be hell of a difficult to work on while lying on its back!!

The right hand figure circumvents both those problems but the clay would be almost 5cm thick! That seems like a waste of clay and how would one cut out the windows? They would end up being 5cm deep and look ridiculous. The middle figure shows a chimney and attic window in position.

Will have to think about this and take advice.

Incidentally, am really enjoying the pondering of these technical issues; unlike when I was faced with technological issues in the laying of and wiring of the railway tracks.

Perhaps I'm mellowing or perhaps having a compulsory set time of 3 hours each week (that's the duration of the weekly evening class) when I have to, by virtue of having signed up to the class, devote my energies to non-work related or non-domestic issues, enables me to indulge in such pondering without feeling I should be doing something else.

Listening to Lupu playing Schubert: Piano Sonata no 16 to be precise.

Any list of "10 things I want to do before I die" would include seeing Lupu in concert. Apparently, Radu Lupu (born 1945) has given no interviews for over 30 years and has a reputation for being a recluse. But here is a quotation from a newspaper article of a few years ago.

"No recluse would circle the globe to give 80 concerts annually, as Mr. Lupu does, yet because he acknowledges the audience only briefly, with a sober bow, he is often seen as "monk-like." "