﻿Every year when we go to France in the summer we attend the various outdoor events that each village holds. There is always a dance. Very free form with people making up their own steps and dancing with anyone and even dancing on their own.
We joined in this year. But in order to take a fuller part next year, I am attending Tango lessons held near my home in Glasgow.

I have no interest in any other kind of dancing. Hate the music of waltzing and cha cha cha etc and especially of Scottish Country dancing. Also, I dislike the regimented element of these dances.

The first thing that the teachers emphasised last night was that one can innovate in the Tango. Also it is very slow. And, I like the music. The only rule seems to be not to bump into any one else.

Recently, I saw a video of tango classes in Argentina being used to rehabilitate elderly people who had suffered heart attacks. That's the dance for me.

I wasn't nervous before the class because I had absolutely no expectations whatsoever.

It turned out that I was indeed the most incompetent and unnatural dancer in the class BUT not by a massive distance. 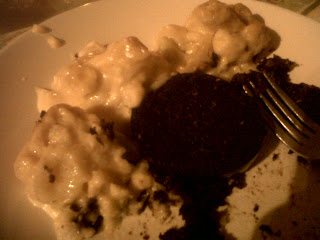 I've always been ambivalent towards it but it did introduce me to Talvin Singh, The Invisibles and Roni Size.

Will look into some of those on the short list.
Posted by Tony Morris at 15:53