The last couple of months has seen a significant decline in my interest in the model railway.

But yesterday I got an email from a French magazine which re-kindled my interest.

Basically, it was advertising a locomotive made by the European manufacturer, PIKO. 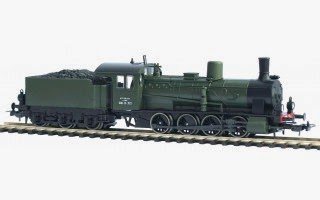 The cost was 139 euros and it operated on the French railways during the 1950s. I'm not buying it, but, as I say, it re-kindled my interest in the layout.

As far as I can find out the locomotive is based on German locomotives left by the defeated Prussians in Alsace-Lorraine after the 1st World War armistice.

I'll have to do some more research. But I like it's distinctive Continental appearance and feel.

The latest podcast from Optimo on Rinse FM (July's edition) is really growing on me. It's a treasure trove of electronic music. You hear an artist on the podcast and you want to explore him (or her), tracking down other stuff they've recorded.

Case in point, this time around:

As I said in a previous blog, this summer has provided me with 3 outstanding (and 1 good - the Epstein) autobiographies.

But the best of the lot was Shaun Ryder's.

And go into the Amazon site and read the customer reviews - wall-to-wall accolades.