Since I cannot do much with my layout over the next few days I thought I would reprise some of the general issues involved.

Or, in French, echelle N vs echelle HO.

HO scale is equivalent (more or less) to the British OO scale of Hornby and Triang fame.

"The name HO is derived from the fact that its 1:87 scale is approximately half that of O scale which was the smallest of the series of older and larger 0, 1, 2 and 3 scales introduced by Märklin around 1900. In most English-speaking markets it is pronounced "aitch-oh" and written with the letters HO today, but in German it is pronounced "hah-null", and still written with the letter H and numeral 0."
Wikipedia.

I didn't know that; perhaps, when I look up HO related items on the internet I should also search for H0 (aitch zero).
N scale is the much smaller 1:148.

Here is an HO scale and an N scale French carriage. 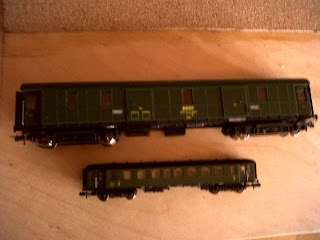 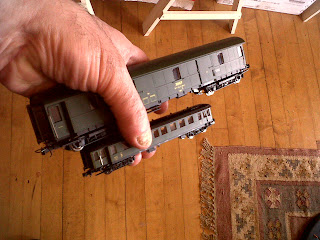 The advantage of N scale is that one can run 8, 9 or 10 coach passenger trains on a layout at home whereas space usually prohibits doing the same for HO scale.

The disadvantage of N scale is (in my opinion) that it is far too small and finicky.

Apparently, Boris Pasternak, called the early years of the 20th Century, "the era of Scriabin".

In an earlier blog I stated my intention to explore Scriabin's music. 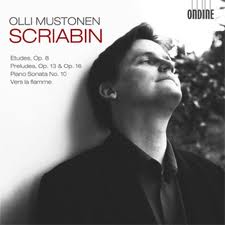 A photograph of the eccentric Russian, Scriabin. 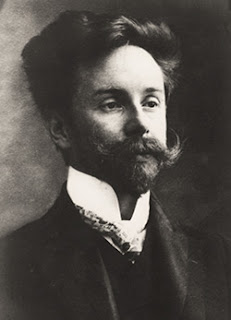 Did absolutely no fasting this Lenten period.