Came across a very similar blog to mine, today.

He is basically writing a diary about the trials and tribulations of building an O scale German model railway - although he is British, I think.

He started the project in 2007 and I think he is in his mid-fifties. The main difference between the two of us is that he was already a vastly experienced model train enthusiast before he started.

This is the opening remark from his blog back in 2007.

And welcome to, what will be, my diary of my adventure into building an O gauge Layout.

Having modelled railways for most of my adult life, I have "tried " Z gauge, N Gauge, HO Gauge and even G Scale ( LGB) .

It was inevitable therefore, that at some stage, I would have to give O gauge a whirl."


Here is a picture comparing N, HO and the much larger O scale. (HO means half O). 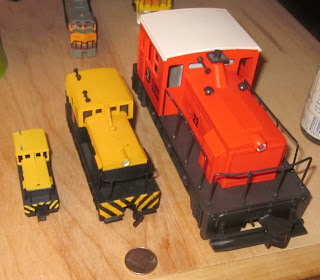 So, what about Z scale? and G scale?

As I write this blog I can feel the tears well up. The reason being that I took the decision to listen to Gavin Bryars'  26 minute epic "Jesus Blood Never Failed Me Yet". I shouldn't really play this piece because it always has this effect on me.

For those of you who know nothing about it, here is an extract from Gavin Bryars explaining its genesis.

"In 1971, when I lived in London, I was working with a friend, Alan Power, on a film about people living rough in the area around Elephant and Castle and Waterloo Station. In the course of being filmed, some people broke into drunken song - sometimes bits of opera, sometimes sentimental ballads - and one, who in fact did not drink, sang a religious song "Jesus' Blood Never Failed Me Yet". This was not ultimately used in the film and I was given all the unused sections of tape, including this one.

When I played it at home, I found that his singing was in tune with my piano, and I improvised a simple accompaniment. I noticed, too, that the first section of the song - 13 bars in length - formed an effective loop which repeated in a slightly unpredictable way. I took the tape loop to Leicester, where I was working in the Fine Art Department, and copied the loop onto a continuous reel of tape, thinking about perhaps adding an orchestrated accompaniment to this. The door of the recording room opened on to one of the large painting studios and I left the tape copying, with the door open, while I went to have a cup of coffee. When I came back I found the normally lively room unnaturally subdued. People were moving about much more slowly than usual and a few were sitting alone, quietly weeping.

I was puzzled until I realised that the tape was still playing and that they had been overcome by the old man's singing. This convinced me of the emotional power of the music and of the possibilities offered by adding a simple, though gradually evolving, orchestral accompaniment that respected the tramp's nobility and simple faith. Although he died before he could hear what I had done with his singing, the piece remains as an eloquent, but understated testimony to his spirit and optimism.

The piece was originally recorded on Brian Eno's Obscure label in 1975 and a substantially revised and extended version for Point Records in 1993. The version which is played by my ensemble was specially created in 1993 to coincided with this last recording.

Available on iTunes.
Posted by Tony Morris at 13:43