While I'm still trying to summon up the energy to move ahead with the main layout, I've been indulging in some internet windows shopping.

Specifically, I've been looking at these hand-painted brass locomotives by Fulgurex, Lematec and the new budget line of Lematec called Modelbex.

Of course, one cannot really assess how these HO models look from viewing web pages. Furthermore, some of the plastic-bodied locos by the likes of Roco and Jouef look pretty good on the web.

Here are some images:

or should that be

Sudbin's playing is certainly softer and twinklier than Mustonen's slightly harder-edged approach. But does that add up to a difference in spirituality? I'm not sure.

Many years ago we bought two very large oil paintings by the Austro-Glaswegian artist, Hilda Goldwag.

She lived in a poky council flat in the north-west of Glasgow and died in her eighties a couple of years ago.

We visited her several times in her flat.

She came to Glasgow just after the second world war and subsequently discovered that every living relative had been exterminated in the holocaust.

I asked her how this had affected her religious beliefs and she said that she had lost all belief in any kind of God. She stated this flatly and with the same indifference that I would proclaim my loss of belief in Father Christmas.

When I recounted this incident to my boss this morning, he said that that was hardly surprising. 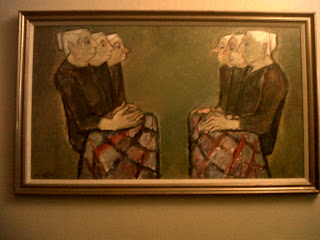 Hilda taught art classes in an old people's home for many, many years and this painting which hangs in our hallway is of  some residents there.
Posted by Tony Morris at 14:06