Bit of an exaggeration, but the Gare du Nord has now been completely glazed and there is no guarantee as to how the glazes will turn out in the firing. After this long journey of all those night-classes I have made something that I never thought I'd be able to - it is exactly what I want for my layout; it has survived the first firing: it has survived being left on a shelf in a busy arts and crafts classroom; and now everything could be ruined by the glazes turning out too darkly.


I suppose the new glaze is lighter than the glaze that colours the windows of the facade.

By now the facade will have been fired and I suppose I could go into the college before next Tuesday to see how it fared. But won't.

I was loaned this book by my boss today: it has the intriguing sub-title: Sermons on Healthy and Unhealthy Religion. 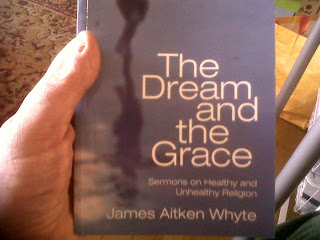 Right up my street. I love a good sermon.

Will report back in days to come.

For years I used to assist him in the running of a weekly prayer group devoted to the Polish Saint of Divine Mercy, Faustina.

In the end, domestic pressures meant we had to give it up; but I do miss the atmosphere of mysticism and the divine that was engendered there.