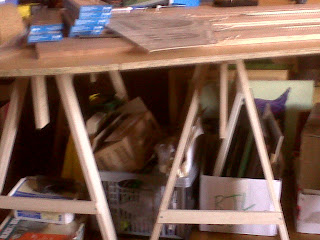 When I look at this mess I just think: "What's the point?". The whole task of pinning down all the track and wiring up all those points motors takes on the character of insurmountability.

In other words, the hobby has acquired an inertia that I don't seem to have the strength of character to overcome.

Naturally, I have tried to tackle the situation. After all, this is meant to be an enjoyable hobby not a trial to be battled through.  I tell myself to take it step-by-step, don't try and do it all at once, break it down into manageable goals and then realise the pleasure of achieving each of those goals.

Instead, I look at the mess then leave the room and do something else.

Sometimes a radical clear out is necessary - a clearing of the decks. A friend of mine was finding his business was getting on top of him, his office was a mess, he felt sick even going  near the place. A tidying up or even re-decoration wouldn't be enough to lift the rock that was sitting on top of him and crushing his resolve. So, he upped sticks and moved the business to another location with different views from the windows and a new route to drive in the morning and he hasn't looked back.

My solution was less radical; a literal clearing of the decks was all that was needed. I spent an hour doing it and this is the result:

OK, that junk had to go somewhere; and it has - just off camera. 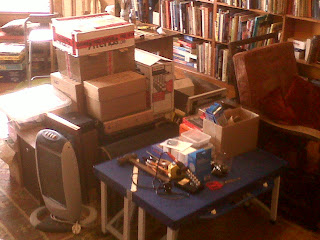 But it's all concentrated in one area and can be ignored.

Was talking nonsense yesterday about Dubstep having a rhythmic structure of 1,2,3,4 and 5 and 6,7,8,9. Listened to a few tunes today and NONE of them fit that rhythm. Sorry.

For my 50th birthday (many moons ago) my late parents gave me a print of Bernard Perlin's painting, "Orthodox Boys".

The original is in a warehouse at the Tate, London, and it cost quite a sum of money to have the Tate  make a full-size colour copy of it.

If you scroll up the screen and look at the second photograph of my room  you can perhaps make out, on the wall, above the white radiator, the print covered with a shiny protective sheet of plastic. I got that sheet specially made by Stockline Plastics of Glasgow. I visited their factory a few times and very helpful they were. 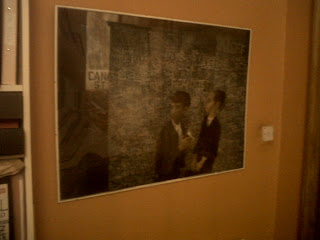 For me this painting has everything and I never get tired of looking at it.
Posted by Tony Morris at 15:49