Great News! (in the Dubstep department)

The test track has been put away - might break it up for spare parts at a later date. 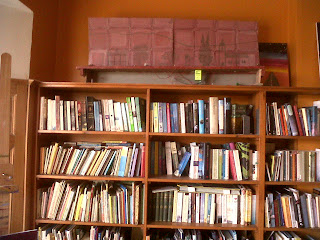 So now I'll have to turn my attention to the actual layout and get the track pinned down. 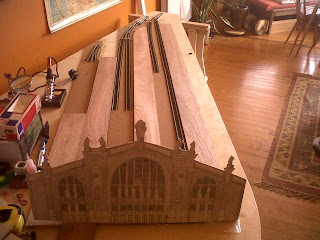 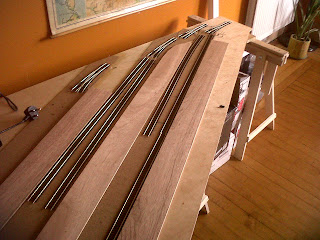 I'm pleased that I have stuck with my original plan for the layout - drawn up last November.

Here it is (there will in fact be a spare siding at the top of the layout, but that's the only change.) 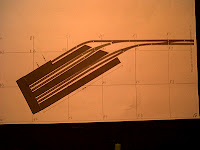 And once more, here is the general idea - this has remained constant since November, and that reassures me that I will see the project through. 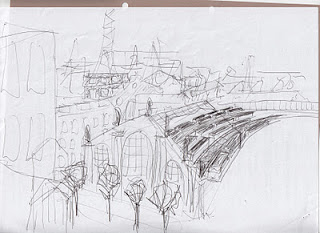 
After months of trying, I've finally brainwashed myself into not just liking but actually needing Dubstep. That beat of 1,2,3,4 and 5 and 6,7,8,9 must correspond to my cardio-vascular rhythm.
After much dipping of the toe into the water I downloaded this compilation from iTunes.
I like its brutality and incessantness. 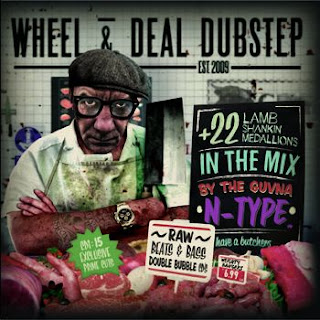 And here is a surprisingly erudite review of the album from somebody writing in July 2011.

"Things are heating up for bass music releases in the last leg of this summer. The largest and perhaps most well executed of these is Wheel & Deal Dubstep Vol. 1, offering 25 "dubplates" from a selection of well-known producers as well as some more recent additions to N-Type's stable of bass peddlers. The tracks that really stand out here are those that appear to advance the language and form of the genre at hand without losing it's original emphasis on sparsely populated, bass-filled and reverberant mindscapes. With its skanking chords, dark samples and grimey, wavering bass, Coki's "Madman" is a hands down favorite - though it will no doubt annoy the tits off of many a fan of dubstep's more melodic treatments. Up and coming producer Benton delivers a supremely enjoyable gangster wobble on "Videodrome" and N-Type and the Others combine cinematic samples and evolving bass mutations on a break-filled "Shadow". Kutz's collab with DJG on "Hella Tight" makes for a compelling match to the Coki track and should not be passed up by anyone looking to pick and choose from the digital release. Also worthy of mention, are some very lush, deep numbers woven together by Lemon D and Seven.
While there are a couple of misfires here and there - in my opinion it could have shed a good five tracks - this compilation is well worth a long listen simply for it's unequivocal representation of Dubstep's energy and complexity. Apart from the digital download, it's been packaged into two 12" releases and double CD (shipping today you lucky dogs!). Both the CD and digital album purchase offer a seamless mix done by the head butcher himself. Here's to another year of wheeling and dealing!"

But my ultimate recommendation is Jakwob on Radio 1 Extra. Unfortunately, these programmes are only available for 7 days, thereafter they disappear.