Visited a different cafe this morning. More of a shack on the street, actually. Very busy and smokey and French. But two British folk arrived and parked their Brompton folding cycles like so: 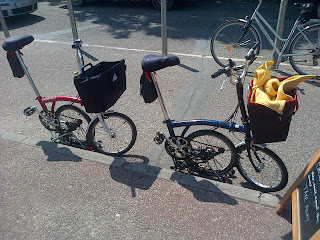 I wish these British folk would go back to their own country; they're not wanted here.

Anyway, I proceeded to read a chapter in my text book entitled: "Avatars of Contingency: Suares and Sartre." Surely here there'll be a definitive statement of the meaning of "contingency". But, unfortunately there wasn't: just the usual contrast with "necessity". For me, that is not the definitive contrast. "A posteriori" is usually contrasted with "necessity". But Sartre's use of "contingency" seems to have little to do with the concept of "a posteriori". 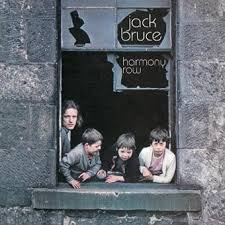 The first unsuccessful meal of this holiday: chicken and chips at the camp cafe (not restaurant) presented in a disposable cardboard dish with plastic cutlery. Weighed heavily in my stomach during and afterwards. And, you had to order it at least 8 hours in advance. 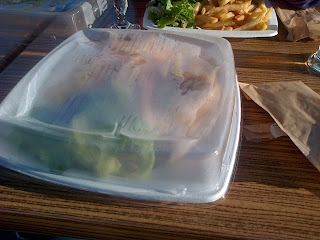 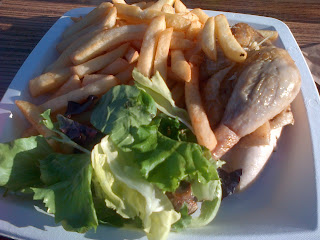 Cost per head including Stella Artois: £7.25

That Rupert Everett memoir - continues to amuse and shock and inform (the latter re what happens behind the scenes in the theatre.)